Foodpanda rider cuts across 4 lanes... and crashes into another Foodpanda delivery guy 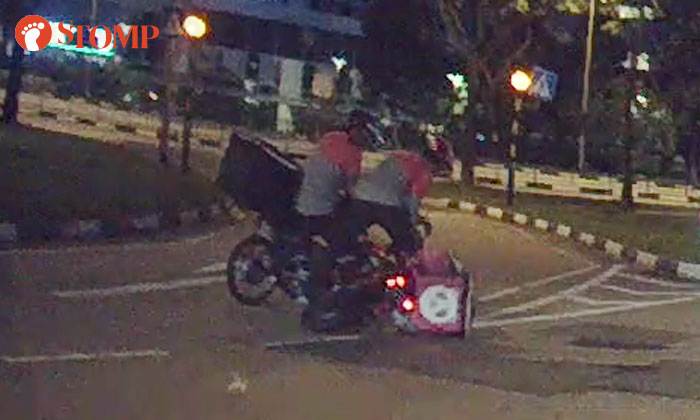 Stomper Lawrence was driving along Boon Lay Way on Sunday (Aug 26) when he saw a Foodpanda rider collide into another Foodpanda delivery guy while turning left into Jurong Gateway Road at about 7.24pm.

Both delivery guys appeared to be riding e-bikes.

Lawrence shared a video of the incident that was recorded on his in-car camera.

In the video, the first Foodpanda rider is seen cutting across four lanes and in front of Lawrence's car before crashing into the other rider.

"The Foodpanda rider didn’t appear in my rear camera so this means he could have come from the opposite direction and cut across using the opening in a road divider for vehicles making U-turns only," said the Stomper.

"I think this is the luckiest day of his life.

"If I had moved off a second earlier, or if there was a car coming from my left, he would have crashed with a car instead of an e-bike and would be gone by now.

"Foodpanda should educate their riders on road safety and implement some rules to protect them.

"I hope they can put their safety first, family second and customer third."