Kopitiam poster to stop KFC customers from taking straws: "It could have been handled more diplomatically" 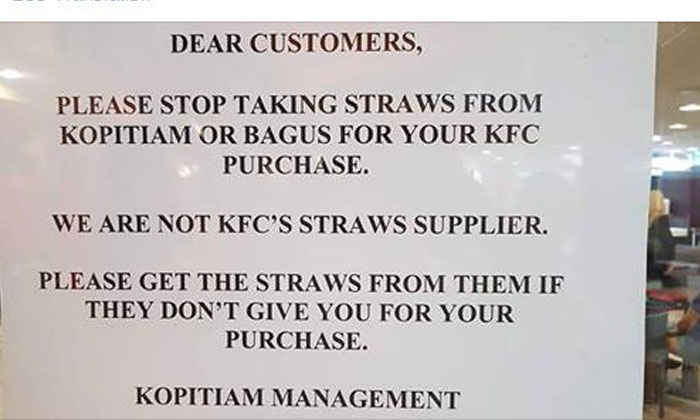 Kopitiam has responded to a Stomp query regarding a notice that was put up at a Kopitiam outlet telling "KFC customers" to "please stop taking straws from Kopitiam", saying that the matter could have been handled more diplomatically.

Stomper Sufian had alerted Stomp to a photo of the notice that was posted by Facebook user Red Nira Nira.

In the caption that accompanies the post, it states that the notice was put up at the Kopitiam outlet in Greenridge Shopping Centre.

The notice also stated that Kopitiam is "not KFC's straws supplier" and to "get the straws from them if they don't give you for your purchase".

The notice is then signed off with "Kopitiam management".

In response to Stomp's query, a Kopitiam spokesman said that the matter could have been handled in a better way.

Nevertheless, he added that Kopitiam was in favour of the 'No Straw' movement.

In a statement, Kopitiam said: "Whilst our operations team took the initiative to try and alleviate the ground situation, we acknowledge that it could have been handled more diplomatically. The poster has since been taken down.

"Kopitiam is supportive of the ‘No Straw’ movement and will review the feasibility of partaking in this meaningful initiative.”

Do you support the 'No Straw' movement? Take part in the poll.