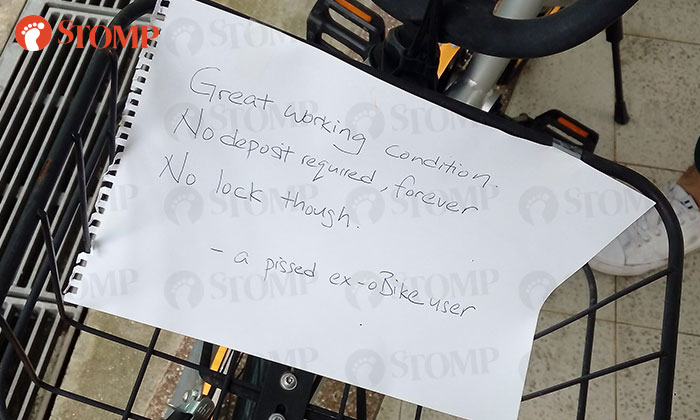 Stomper Colter came across an unusual note on an oBike near 10 Compassvale Lane at about 3pm on Tuesday (July 10) while he was returning home.

The note read: "Great working condition, No deposit required forever. No lock though."

It was signed off by "a pissed ex-oBike user".

Amused, Colter took a photo of the note and sent it to Stomp.

He said: "I guess the person must be pretty mad, seeing that oBike suddenly just left Singapore.

"Perhaps he had difficulty getting back his deposit. My friend is caught in the same situation as well."

"Moreover, I didn’t dare to use this bicycle because I thought someone would think I’m the one who wrote the lock, or worse still, broke the lock."

Related Stories
Angry note for 'idiot' who left wet clothing out to dry found at Serangoon lift lobby
Even Pokemon Go trainers stop to peek at angry notes left on errant driver's Ferrari at Bedok Reservoir
"Are you an idiot?" Audi driver gets angry note after parking on two lots at Jln Bukit Merah carpark
More About:
oBike
complaint
note