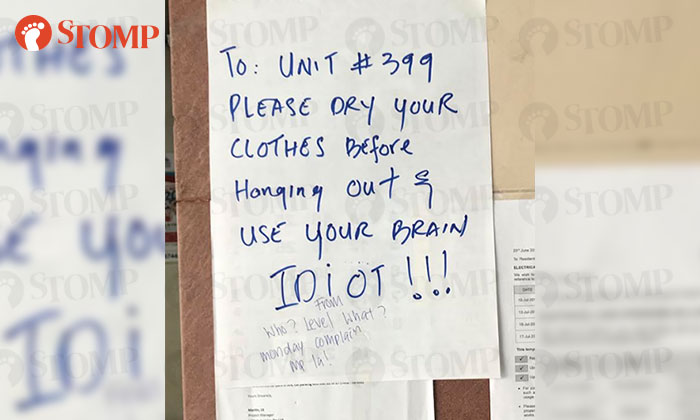 Stomper A came across an amusing note left at the ground floor lift lobby of Block 146 Serangoon North at about 6pm on Saturday (July 7).

It was written on the note:

“To unit #399, please dry your clothes before hanging them out, and use your brain, idiot!”

However, someone else had also scribbled over the note, saying:

“From who? Level what? Monday complain MP lah!”

A told Stomp that she wholeheartedly agreed with the person who had scribbled over the note.

“The note is just annoying. Why paste this on the lift?

A's mother told her that the residents who placed up the note live on the 2nd floor and have a habit of hanging their laundry out in the night.

“I don’t know why they do it at night, but at least now we know there’s also another household doing the same.”

A also said that she noticed that the note was missing when she took the lift down on Sunday (July 8).