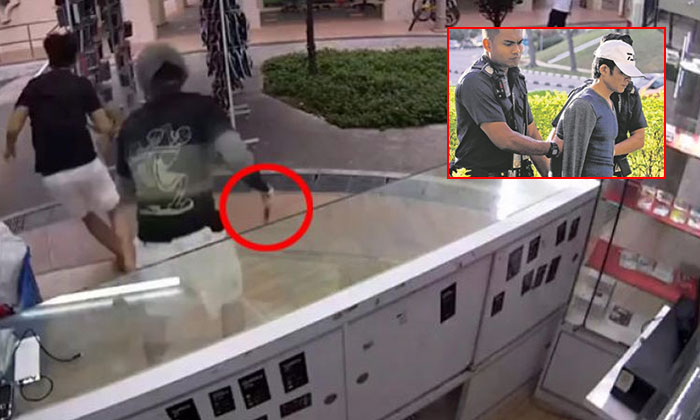 A 37-year-old man, upset over a dispute with a phone shop employee, allegedly attacked the latter with a knife before fleeing.

The slashing incident happened on Tuesday (April 24) about 6.45pm, in a shop at Block 26A Chai Chee Road.

According to Lianhe Wanbao, the victim, Mr Chen, 42, suffered injuries on his head,  was subsequently conveyed to Changi General Hospital for treatment.

The suspect was later arrested from his flat at Block 39 Chai Chee Road on Wednesday evening (April 25).

The boss of the mobile phone shop, Mr Zheng, told reporters on Thursday morning (April 26) that Mr Chen had left the country.

He added that the wounds on Mr Chen were not deep, and he was recovering.

Mr Zheng said that on the day of the incident, he had received a call from Mr Cheng, who told him: "Boss, I have been stabbed by a customer. Come over, quick!"

Mr Zheng said that he thought that his employee was joking at the time but still checked on the situation from a closed-circuit television (CCTV) app on his phone.

He saw police officers at the shop and realised that Mr Chen had been attacked.

Said Mr Zheng: "My employee said that the suspect had gotten into a dispute with him a day before. That’s why he returned on Tuesday to settle the score."

According to CCTV footage, the suspect lingered outside the store at first.

Upon realising that Mr. Chen was alone in the shop, he dashed in and cornered him.

The two had an argument which lasted for about a minute before the suspect reached into his right pocket for a knife.

Seeing that the suspect was drawing a knife, Mr Chen grabbed the suspect’s right arm to prevent him from doing so, and quickly ran out of the store.

Mr Zheng added: "My employee told me that he ran for about 20 metres before the suspect caught up to him.

"He said that he grabbed something to block the blow from the suspect but was still slashed on his head. The suspect left after the attack.

“He immediately called the police and informed me.”

In response to media queries, the police said they were alerted to a case of voluntarily causing hurt by a dangerous weapon at Block 26A Chai Chee Road at 6.46pm on Tuesday.

Officers investigated the case and arrested the suspect in his flat in Block 39 Chai Chee Road on Wednesday at about 6pm.