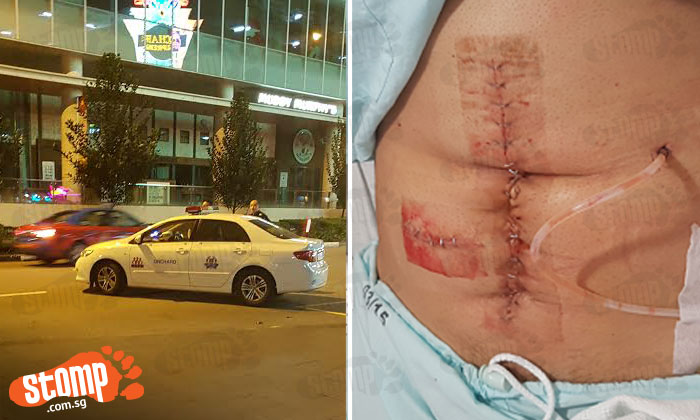 Stomper Sam was allegedly stabbed by a cabby at a taxi stand outside Orchard Towers last Thursday (Jan 19) at around 1am.

In an email and telephone interview, he told Stomp that he was reversing his car near the taxi stand when a taxi coming towards his rear at a high speed stopped about 10cm at the back of his car.

The Stomper said he was paranoid and alighted to check if there were any damages on his vehicle.

He also questioned the cabby, asking him why he was driving so recklessly.

Said Sam about what happened thereafter:

"The taxi driver took something out of a pouch and stabbed and slashed my abdomen.

"I didn't know what the weapon was then.

"Two men then came from Orchard Towers and told the taxi driver to 'zhao' (leave) first.

"It was then that I realised the weapon was a scissors. It looked like the kind that was used for gardening.

"The taxi driver left and one of the men started to push and punch me after that.

"The other was holding on to the scissors and scolding vulgarities.

"I was already bleeding at that time and they knew that I had been stabbed."

The Stomper said that a passerby saw what happened and called the Police. The two men started hurling vulgarities at the witness and then left after that.

Despite being injured the Stomper managed to drive to nearby Pan Pacific Hotel.

There, he vomited twice before the Police arrived. He was then conveyed conscious to Tan Tock Seng Hospital in an ambulance.

Sam said that he required 22 stitched to close the 15cm wound he sustained.

The hospital bills came up to $10,500, and he cannot not obtain any subsidies as he is not a Singaporean.

The Stomper was given a month of medical leave to recover from his injuries.

According to Sam, the cabby who assaulted him was driving a taxi with licence plate number SHA4415K.

Said a Police spokesperson with regard to the incident:

"On Jan 19, at 1.10am, the Police were alerted to a case of voluntarily causing hurt with a dangerous weapon at 400 Orchard Road.