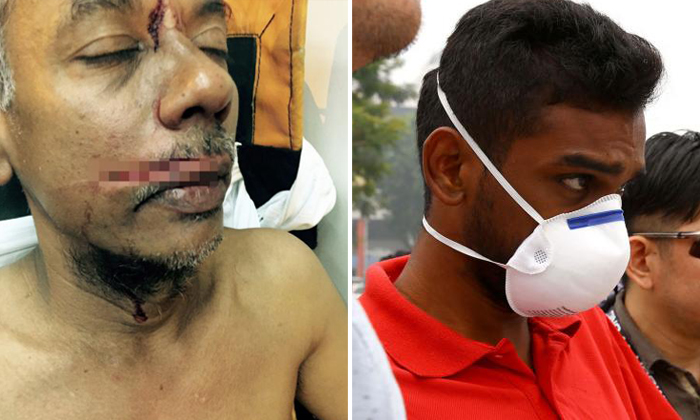 He allegedly paid $2,000 to his business associate, Anwer Ambiya Kadir Maideen, who is purportedly a headman of the Sio Ang Koon secret society.

Mr Liakath had a 7cm cut over his right upper lip, which extended to his right cheek, and a part of the cut went through to the inner surface of the lip.

On Tuesday, Joshua, 23, was sentenced to 6½ years' jail and six strokes of the cane for the slashing with a knife and other crimes.

He pleaded guilty to five charges - one of causing grievous hurt, two of rioting, and one each of disorderly behaviour and using criminal force against a policewoman.

Five other charges were taken into account in sentencing as part of his plea bargain.

A district court heard that on Aug 22 last year, Mr Liakath, 52, stood outside Victory to tout for customers. He had previously worked for Zam Zam from 1985 to 2004.

When a policeman came by at about 6pm, Mr Liakath said he was touting for customers because staff from Zam Zam were doing so.

Zam Zam staff Koleth Navas, 29, overheard this and an argument broke out between him and Mr Liakath.

The policeman told them to stop arguing before leaving.

Shortly after, Zackeer allegedly threatened Mr Liakath in Tamil that he would "do him" within a week, the court heard.

Anwer in turn told Joshua that Zackeer had asked for Mr Liakath's face to be slashed, in return for $2,000.

Joshua got his older brother Joel Girithiran Surainthiran, 24, allegedly also a Sio Ang Koon secret society member, to help him in the slashing.

Joshua also asked his friend Ramge Visvamnathan, 19, to help him act as a lookout.

Joel, Ramge, Zackeer, Anwer, Koleth Navas and Koleth Abdul Nasir have all been charged with engaging in a conspiracy to cause grievous hurt to Mr Liakath and/or criminal intimidation by threatening to hurt Mr Liakath.

The cases for all six are at a pre-trial stage. This is not Joshua's first brush with the law. He was arrested for gang fight in 2013 and also for assaulting two people in Clarke Quay the same year.