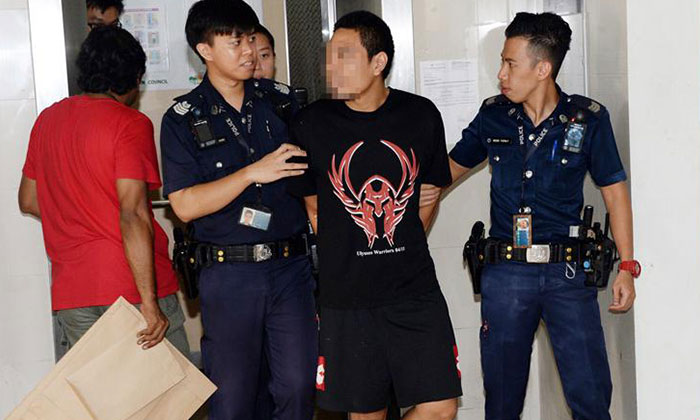 A father, son and mutual acquaintance were drinking together yesterday (Mar 16) morning, but for reasons unknown, started fighting at around 8am, even slashing each other with weapons.

The incident happened at Block 212, Tampines Street 23, and the 59-year-old father suffered lacerations on his abdomen and fingers, inflicted by a 20cm weapon the 51-year-old acquaintance yielded.

The perpetrator fled after drawing blood.

All three have been arrested.

According to Shin Min Daily News via Lianhe Zaobao, the acquaintance was a friend of the victim’s 31-year-old son, and the victim reportedly knew him as well.

The trio had been spotted drinking together in the wee hours yesterday, but things soured for reasons unknown and the trio took their fight to the void deck of an opposite block.

A resident told reporters that she spotted the three of them having a negotiation at 7am yesterday (Mar 16).

A 57-year-old owner of a convenience store operating at the foot of Block 210 also revealed that he saw the three of them chasing each other with weapons at around 8am:

“They ran past my store, before going back to Block 212.”

It is believed that the son had drawn a weapon to attack his friend, and the friend was also seen yielding a 20cm weapon, which he violently stabbed the victim’s abdomen with.

The victim’s fingers were also injured.

The friend fled after inflicting the wounds, while the victim and his son rushed back home to stem the bleeding.

“When i returned, I was shocked to see blood all over, inside the lift.”

The police said that they received a call regarding the incident at around 8.21am, and a 59-year-old man was conveyed to a hospital for treatment.

Three men were charged with the possession of deadly weapon with intent to assault.