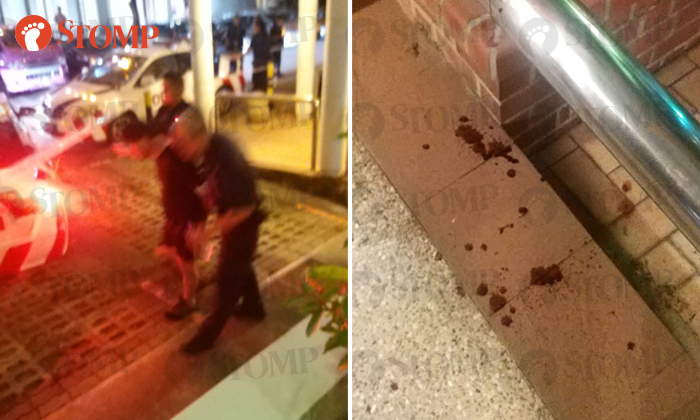 Two men, aged 26 and 42, were arrested after allegedly fighting over a woman in Hougang on Sunday night (Feb 2).

In response to Stomp queries, the police said they were alerted to a case of voluntarily causing hurt by dangerous weapon at Block 101 Hougang Avenue 1 at 8.41pm.

Two men were arrested in relation to the case.

The younger male was subsequently taken to Sengkang General Hospital in a conscious state.

Stomper Ng, a resident in the vicinity, was at the scene at around 10pm and saw a man being taken away in handcuffs by the police.

Ng said: "I overheard from onlookers that the two men were fighting over a woman.

"Police took away a knife that was used in the fight.

"I also saw a woman being brought back to the police station, though she was not handcuffed."

According to Ng, the police left the scene at around midnight.

The Stomper added: "It seemed like a serious fight as there were blood stains on the pavement and along the park connector nearby."