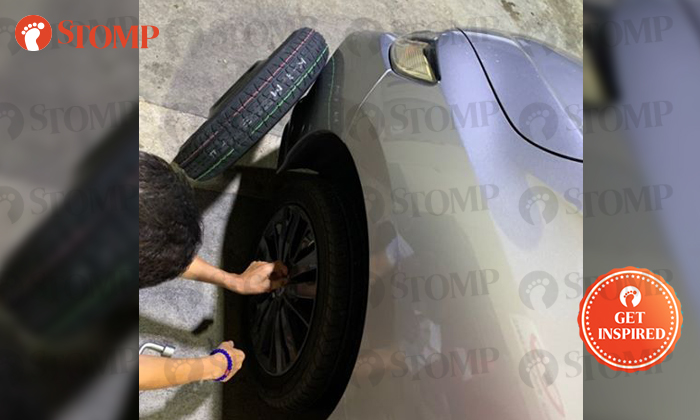 Stomper Jacquelyn was suffering tyre trouble but her attempts to fix the problem were futile and no one else was available to lend a helping hand — until a kind stranger appeared.

Jacquelyn said the incident occurred at an Esso petrol kiosk along Ang Mo Ko Avenue 8 on Sunday (Dec 15), at around 8pm.

She recounted: "I had a flat tyre after I left Bishan-Ang Mo Kio Park. I drove to the petrol kiosk to top up petrol and tried to pump air to my tyres.

"Unfortunately, the flat tyre did not get inflated despite my attempt.

"I drove to park at the side of the kiosk and tried asking the pump attendant to help me, but he was very busy and could only come in between his duties of pumping petrol.

"As I was standing by my car with all the tools, this kind-hearted man came up and asked if I needed help."

According to Jacquelyn, the man spent around 20 to 30 minutes helping to change her flat tyre.

The Stomper then offered him a red packet, which he rejected.

Jacquelyn told Stomp: "He said he merely wanted to help and did not expect any rewards, so I would like to thank him again here.

"I feel very happy that there are still kind souls around to help others."