Awesome cabby helps Stomper to change tyre when no one else stopped, declines reward 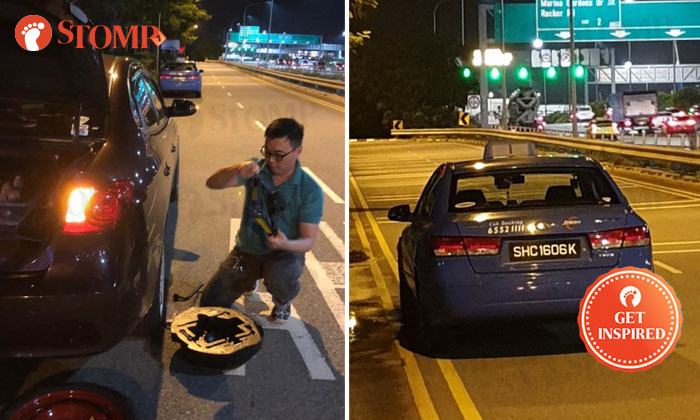 It was about 8.40pm on a humid Monday night (Dec 3) when Stomper Suelyn​'s car tyre burst, leaving her stranded along Straits Boulevard and unsure of what to do.

She was frantically surfing the Internet for a tow service that she could call as other motorists went past her.

Suelyn told Stomp: "I didn't know how to change a tyre and I was surfing the Internet looking for a number to call to get my car towed away."

Then, about 10 minutes later, a blue ComfortDelGro taxi rolled up and parked in front of her car.

From it emerged her rescuer, a helpful taxi driver who offered to help her replace her tyre.

She told Stomp: "I was relieved when he came to help me.

"There were other vehicles that passed by me in the 10 minutes that I was standing by the road, but none of them stopped to help but him.

"I had a spare service tyre and tools in my car, which he used to carry out the job."

While he was replacing the tyre, Suelyn said that the driver advised her on which workshops she could visit, which operated at night.

She said: "He gave me advice on where I could go to get my car further repaired if necessary, and discussed the prices I would have to pay if I had to end up going to one of them.

"In total, he spent about 15 to 20 minutes replacing the tyre, and was sweating because of how much effort he had to use."

The Stomper said that when he was done replacing the tyre, she offered him a token of appreciation, which he politely declined.

She added: "I didn't get his name, but I managed to capture photos of him and his taxi.

"I am very grateful for his help and I want him to gain recognition for taking time out of his schedule to help me.

"Thank you, Sir, for lending a helping hand to a stranger in distress. Kudos to the kind-hearted gentleman!"

Related Stories
Men rush to stranded uncle's aid in Woodlands after seeing appeal for help on Facebook
Foodpanda deliveryman who helped elderly uncle cross road in Yishun deserves recognition
Biker who stopped to direct traffic gets Goody Bag: "When I saw it on Stomp, I knew it was a big deal"
More About:
inspiring
heartwarming
kudos
heroes
cabby
taxi