Jurong West couple claims pork was hung outside window for only 2 hours, but this pic says otherwise 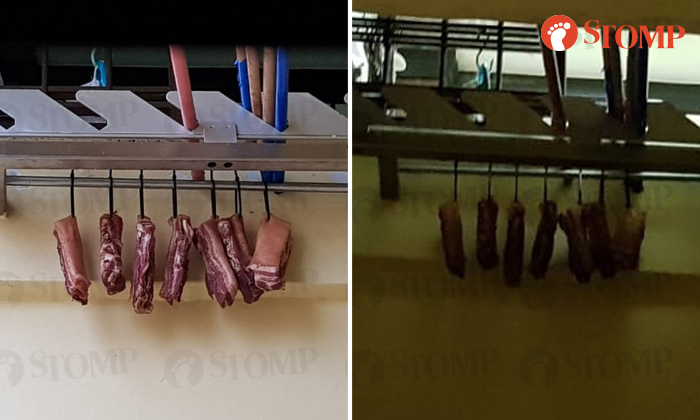 A couple who hung pork outside their window in Jurong West said that the meat was only there for two hours, but their neighbours have refuted such claims.

Stomper S, a resident at Jurong West Street 61 (exact location redacted), saw the slabs of meat on Sunday (Oct 11). He took photos at around 2pm and shared them with Stomp at 3.36pm. 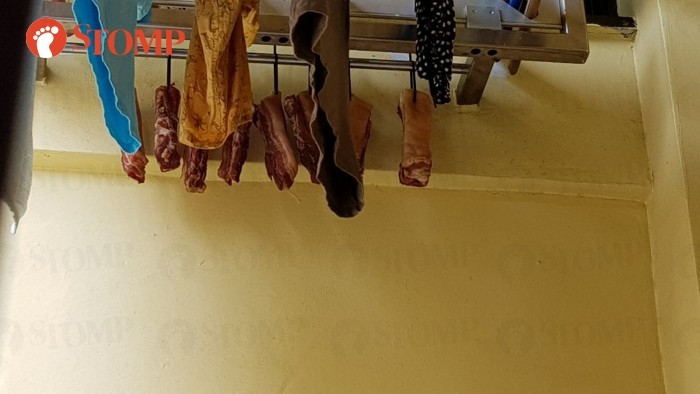 (Photo taken at around 2pm)

S also wrote about the incident on Facebook in a post that has garnered almost 2,000 shares and over 400 comments to date. The post has a time-stamp of 3.41pm.

Responding to Stomp queries, West Coast Town Council had said: "We are aware of the matter. Our staff has approached the said unit and advised them to remove the items.

"For the benefit of our residents' health and hygiene, we would like to remind residents not to hang any food items on the laundry rack."

The online furore subsequently prompted the couple who had hung the meat outside to provide their side of the story.

Speaking with 8world in a report on Thursday (Oct 15), 38-year-old Mdm Yang explained that she had been making preserved pork belly for her husband.

She added: "We used to shop for it online and have it shipped here by sea. But due to the Covid-19 pandemic, the merchant is no longer delivering it, so we decided to try making it ourselves for the first time."

The couple dried the meat in their kitchen with a fan blowing at it for one night.

When they wanted to make dinner afterwards, they found that there was no space to put the pork and decide to hang it outside their window temporarily.

Mdm Yang shared: "We live in a HDB flat, so of course we understand that other people do not want their laundry dirtied, but the meat was completely dry after being dried overnight and there's a windowsill beneath."

She said that the meat was hung outside for less than two hours, and that it was dry and odourless when she brought it back indoors after cooking dinner.

The couple also received a visit from town council staff and were advised to remove the pork, even though they had already taken the meat in and cooked it by then, added Mdm Yang.

Mdm Yang said she truly had not known that this was not allowed and would not do it again.

However, Stomper S has refuted Mdm Yang's claims, particularly about the pork belly being hung outside the window for less than two hours.

S said: "My neighbour was stressed out that day. She had actually hung out her bedsheets and laundry out that afternoon. When she saw the raw meat hanging, she was so shocked and pissed off and had to immediately bring in all her laundry.

"My neighbour took another picture of the meat at 8.09pm on the same day, more than six hours after I did." 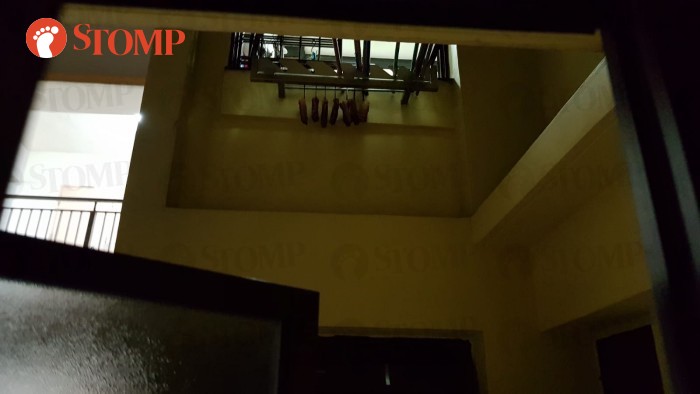 S also said that even though there has not been a repeat of the incident, residents are upset over what the couple told the media.

He told Stomp: "We are angry because the wife is not being truthful and misleading the public.

"She claimed that the raw pork was temporarily put outside the window for less than two hours but this is not true!

"It is already wrong to even have the idea to begin with and moreover, the meat was left outside the window for more than six hours!"

Neither is the Stomper convinced that this was an honest mistake.

He added: "This family has been staying in Singapore for awhile so it's unlikely that they don't know that this is not allowed, they are just trying to act blur.

"They do not feel remorseful about their actions, let alone apologise to the neighbourhood."