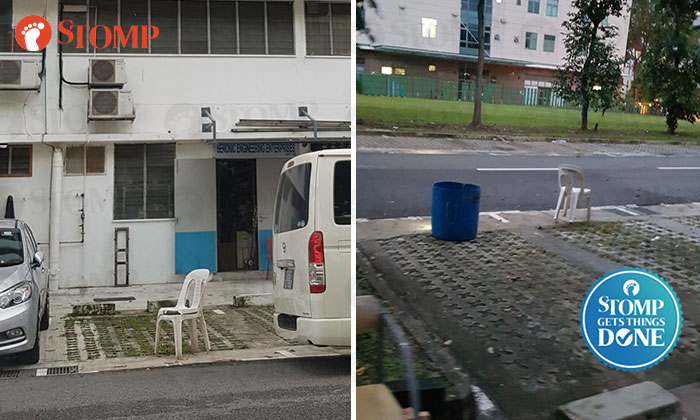 Tenants from nearby shops have been reserving parking lots with items at the carpark behind Block 3027 Ubi Road 1.

Stomper A who works in an office near the block told Stomp in a phone interview that this has been happening for the past five years.

These items used to ‘chope’ the lots range from chairs to water containers.

A said that despite various complaints to the authorities, the situation did not improve.

“It is nearly impossible to get a parking lot at the carpark, especially during the lunch hour.

“It is frustrating when you can’t get a lot but see so many empty lots that have been reserved with these items.

"There are at least three to five lots occupied by items.

"We usually have to wait a long time or park elsewhere."

In response to a Stomp query, a spokesman from JTC Corporation said:

“An inspection has been conducted at the site and tenants who were reserving lots in front of their units have been advised to remove the items from the carpark.

“We will be stepping up our inspections to prevent repeat occurrences.”