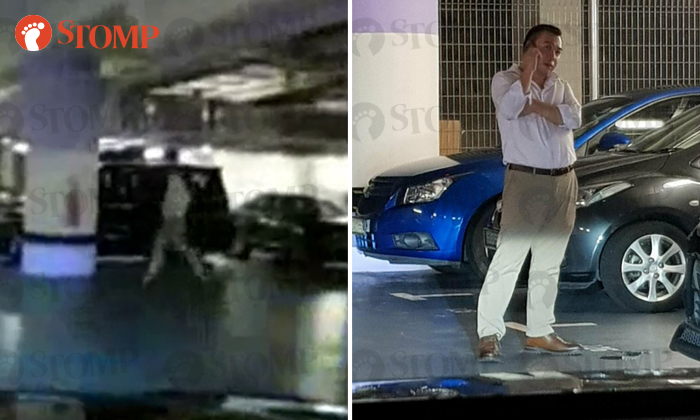 Stomper M spent five minutes going around a carpark at Singapore University of Technology and Design (SUTD) before she finally saw an empty parking lot -- only for it to become 'occupied' by a man.

The man had also spotted the same lot and ran towards it, then stood there and used himself to 'chope' the space.

The incident, which M said occurred around two weeks ago when she was with a friend, was captured on her dashboard camera.

M told Stomp: "When I said I was parking, he said he needed to park as well.

"I asked what he meant because I didn't see his car. He said he was also looking for a lot and that his car was on the way.

"He then went on to ignore me by using his phone.

"I was with a friend and we decided not to do anything as we were both women."

M said she ended up parking at a carpark that was much more inconvenient for her and further away, as it was not opposite the Expo like this one.

She added: "I returned to this carpark afterwards and saw his car parked at the spot.

"Can we chope parking lots like him??? It's so cheapstake, paiseh and laokui leh."

Related Stories
Come on people it's a public parking lot, don't anyhow 'chope' it like this!
Woman parks in family lot, then tells man with kids that she has 3 cars and money to burn
Win liao lor: Woman stands in parking lot to chope spot for driver
More About:
parking
inconsiderate
chope