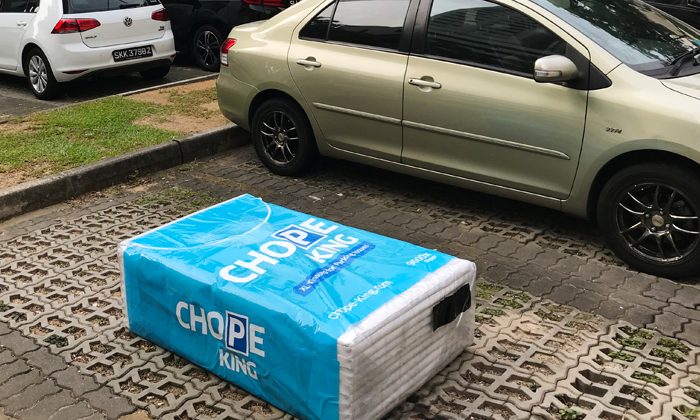 Seen photos of a large packet of tissue being used to 'chope' parking space in Singapore recently? There is actually more than meets the eye.

Images of the bright blue 'Chope King' tissue packet had been posted on social media by online influencers such as SGAG, SMRT Feedback Ltd and preetipls.

Local celebrity Michelle Chong also wrote on Instagram: "I need to get one man because the parking god always not with me."

Netizens were largely amused over the unusual sight, with some asking where they could get the enormous tissue packet too.

Sorry to disappoint those who had hoped to purchase the prop for themselves though -- this is actually part of a campaign by transportation company Uber to spark discussion about parking issues in Singapore.

As a car owner or driver, you would probably be no stranger to frustrations such as traffic jams, getting summonses, finding a parking lot, and exorbitant parking fees.

Also, remember that freeloader 'friend' of yours who is forever asking for a ride? Yup, you are not alone.

Titled 'Boxes', it demonstrates what happens when "single-person box-cars" overflow a city to the point of absurdity.

In fact, a recent study commissioned by Uber shows that:

Which raise the question: Do we need so many cars on the road?

However, there is a solution that can help to save money, time, space and resources: Ride-sharing.

According to the same study, 61% of Singaporeans believe that ride-sharing services like Uber can substitute owning a car.

Let's do our part to #UnlockSingapore and become a more efficient city.

Click here to find out more about Uber's campaign.

Related Stories
All these cabs and yet no one's driving them -- why?
With Uber and Grab, are taxis still necessary?
Too much competition, too little cabbies
More About:
uber
drivers
chope