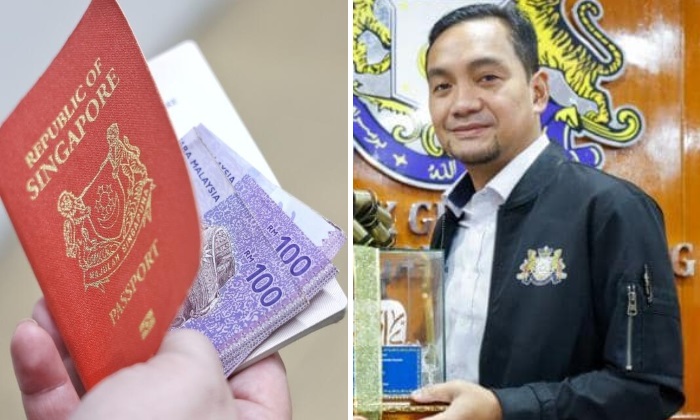 A family of six from Singapore was allegedly asked by a Johor immigration officer for a bribe after they drove past an unmanned booth at the Johor Bahru checkpoint across the Causeway without getting their passports stamped.

The incident went viral on Chinese daily Shin Min Daily News' Facebook page on Tuesday (May 10), prompting a response from Johor Chief Minister Onn Hafiz Ghazi, who said that he will take "this allegation seriously".

"(I will) get the necessary authorities to investigate," he said, adding that he hoped Shin Min could help with the investigation.

A 42-year-old clerk, who wanted to be known only as Mrs Song, told Shin Min on Tuesday (May 10) that her family drove from Woodlands Checkpoint towards Johor Bahru at about 6.30pm last Saturday (May 7), intending to celebrate Mother's Day there.

She was with her 43-year-old husband, their children aged nine and 11, as well as her parents.

At the Johor Bahru checkpoint, an immigration officer removed a safety cone at one of the lanes and beckoned them to drive towards the immigration counter of that lane.

"The glass panel (of the counter) was dark and all four of us adults didn't see anyone inside, "Mrs Song told The Straits Times.

She added: "It has been two years since we drove to Malaysia, so we didn't know if the process had changed, and we were the first car in that lane."

They drove past a barrier which lifted itself after tapping the Touch 'n' Go stored value card.

Realising their error at a customs declaration lane, they pulled over and approached another officer who pointed them to an office.

According to Mrs Song, there, an officer wearing flip-flops while in uniform, informed the family to meet him outside the office.

He told them that an entire family's passports left unstamped was a big issue and the family could be detained and fined up to RM10,000 (S$3,170).

"You want to settle (this) personally or do you want me to report (the incident)?" the officer allegedly asked Mrs Song.

Spooked by the idea of being detained with children and elderly parents, she asked what settling the issue meant – only for the officer to allegedly name a price of RM100 for each adult, totalling RM400.

As she did not have enough cash on hand, the officer allegedly settled for RM200.

"Our corruption laws are such that even if you are not the one who asked to be part of bribe (and) the bribe was asked of you, it is still an offence to give a bribe."

But Mr Wong added that Singaporeans who feel pressured into giving bribes may seek consular assistance, which would, in turn, help contact the relevant authorities in a foreign country.

Cases of potential corruption can be anonymously reported to the Malaysian Anti-Corruption Commission via its hotline at 1-800-886-000, e-mail at info@sprm.gov.my, online and via letters, among other methods.

Public servants in Malaysia found guilty of using their position to receive gratification can be jailed up to 20 years and fined up to five times the value of the bribe given, or RM10,000, whichever is higher.