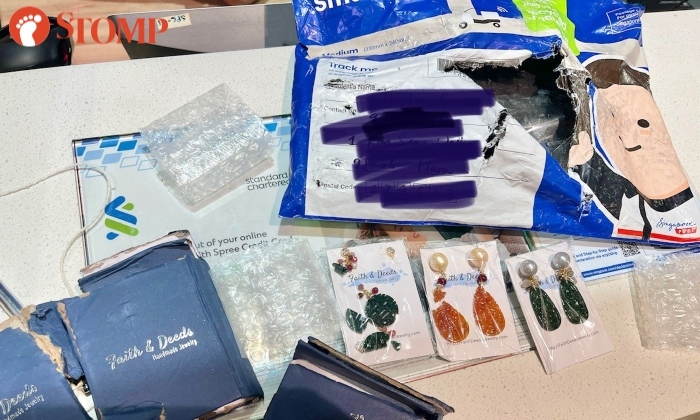 A jewellery business owner discovered that two out of three pairs of jadeite earrings meant for a customer had gotten damaged in transit, but was dismayed that she would not be compensated by SingPost.

Stomper Nicole shared the email response that she received from SingPost, in which they apologised for the inconvenience caused but stated: "Please note that there will be NO monetary compensation for any damaged item."

SingPost told Nicole that it would only compensate her with three SmartPac envelopes of the same kind.

Nicole said the three pairs of earrings were worth a total of $570. The SmartPac envelopes cost between $32 and $38 for a pack of 10.

The Stomper had sent the parcel out on April 10.

She recounted: "On April 13, I realised there were no further status updates on the parcel location so I called SingPost about it. They started searching for the package and finally on April 19, they called me and said it was retrieved and ready for collection without mentioning any damage etc.

"I went to collect it at SingPost Centre in Eunos, only to realise that two out of three pairs of earrings were broken.

"The package had clearly gone under a car or motorcycle to result in the severe damage as shown in the photo. Even the hard paper gift boxes were completely ruined. This is completely a mistake on SingPost's side and no fault on my side.

"But when I demanded for compensation over phone and email, SingPost rejected doing so and said they would compensate me the SmartPac envelopes only.

"Customers entrust their items to SingPost for a safe delivery and anything less than that is a breach of their service agreement, plus not to mention this is a serious damage of valuable items.

"This incident has affected my business reputation because now I have a disappointed customer. It also caused a loss to my business because I had to refund my customer.

"I am furious also because there are no T&Cs printed on the SmartPac envelopes that the compensation would be capped at an envelope. If the customer was not informed at the point of purchase, SingPost should not impose such an unfair compensation policy on the customer just by posting T&Cs that are deep in its website.

"I hope this incident can gain some publicity and give me my justice."

According to SingPost's terms and conditions under the limitation of liability: "To the extent permitted by law, and subject to satisfactory proof of claim by the Sender, SingPost's liability for any damages or loss whatsoever to the Sender in contract, tort (including negligence) or otherwise whosoever and whatever the cause thereof, arising by reason of or in connection with the Service, shall be limited to and be no more than a maximum of three (3) replacement SmartPac products of the same type, but in any case, at the sole discretion of SingPost, to be provided to the Sender.

"For the avoidance of doubt, SingPost shall not be liable to pay the Sender any monetary compensation whatsoever."