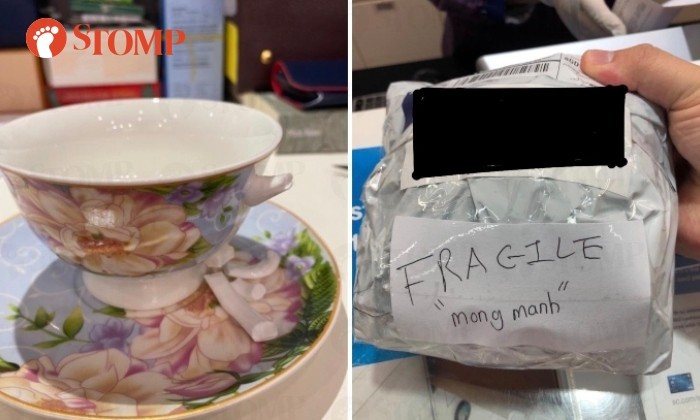 Singapore Post has responded after a customer complained that the fragile cup he sent from Singapore to Vietnam was 'damaged during delivery'.

Stomper Anonymous informed Stomp of the incident on Aug 20 and shared photos of the cup before and after the delivery.

He also shared a photo of how he packaged the cup for delivery.

"I sent out the parcel on July 21 and my friend received it on Aug 3. However, the teacup, which was a birthday gift, was damaged and in pieces," the Stomper shared.

In response to a Stomp query, a spokesman for SingPost said: "SingPost reminds the public that items for shipping should be packed tightly to prevent damage caused by shifting during the shipment process.

"This is especially applicable to fragile items shipped internationally such as glassware, as they have to weather handling by foreign customs officials and airline cargo handling crew.

"Senders are also encouraged to purchase insurance for valuable items, so that they are covered in the event of any mishaps.

"With regards to our customer service, SingPost has apologised to the reader for his experience.

"The customer service officer handling the case failed to reply to the reader within the designated time frame, and has been disciplined

"We have processed the compensation to the reader last week, and he should have received it.”