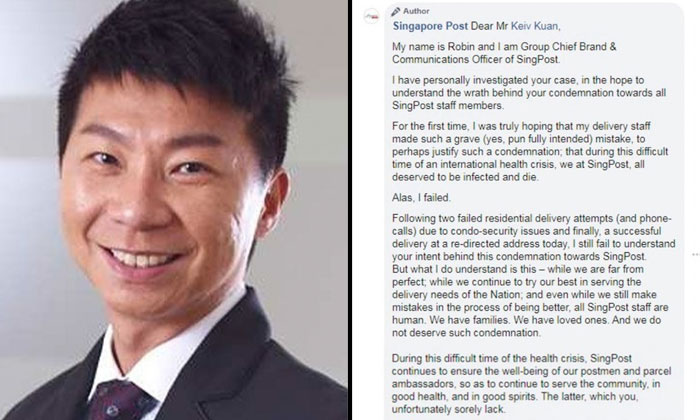 A customer who gained notoriety for his vicious Facebook post wishing coronavirus onto SingPost staff has issued a public apology.

Mr Kuan had wished death and infection by coronavirus, or Covid-19, on SingPost staff over a failed parcel delivery.

He also added that the parcel was successfully delivered the next day.

A person claiming to be Mr Kuan wrote a letter of apology and sent it to various media outlets, including Stomp.

Here is his apology in full:

"I'm the one who got myself embroiled in such unnecessary tussle and would like to take this public.

"I'm deeply sorry for the strongly worded message made to SingPost, after the said 3 unsuccessful deliveries.

"I am guilty of such raucous remarks made online.

"With great and heartfelt regrets, over what I have posted during this critical trying moment where the world needs love and courage to fight against Conoravirus.

"I accept full responsibility for my actions.

"To my family and friends who know me personally, I am truly remorseful.

"Mistake learnt, and I hope forgiveness can be given.

"I would also like to make a kind and sincere request for Mr Robin, the Group Chief Brand & Communications Officer of SingPost, to stop asking his friends on his personal FB account to share the post.

"I would like to put things behind me and move on from this saga."