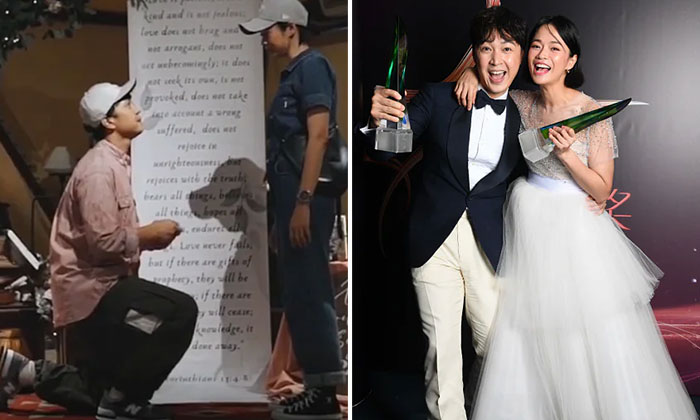 The former Mediacorp actress shared the happy news with a video on Instagram on Thursday (Aug 11) afternoon with snippets from the surprise proposal that had taken place at the Night Safari on July 29.

In the caption, she wrote: "We promised we will let you know so here we are. I said yes!"

She tagged on the emojis for a diamond ring and a couple with a heart.

Glimpsed in the clip is a sapphire ring surrounded by diamonds, which Xu revealed to entertainment portal 8days.sg had cost a five-figure sum.

He said he had actually prepared the ring four or five years ago and it was custom-ordered with the help of celebrity hairstylist David Gan.

Xu, 33, had chosen to propose at the Night Safari as they both love animals and went there often on dates, and it was also where Chin, 37, had worked as a show presenter in her first full-time job.

The intimate event, which took Chin by surprise, was attended by 20 of their closest friends who had been there through the ups and downs of their seven-year relationship.

Among them were actors Zhu Houren, Chew Chor Meng and Rayson Tan, and singer Hong Junyang.

Xu, who took about a month to prepare for the surprise, wrote a letter which he read to her in Mandarin while choking up a few times.

In their interview with 8days.sg, he said she likes receiving handmade gifts. "She finds it very sincere, so I hoped that whatever I told her that night could be kept in a letter. So whenever you feel angry with me, you can take it out as a letter of guarantee."

He added: "And if we have kids, you can show it to our kids too, like, 'Oh this was what your dad told your mum in the past, look how romantic and childish'."

When asked about the timing of the proposal, Chin, who recently left Mediacorp to join a faith-based ministry, said: "I feel like every relationship goes through different journeys, and ours needed maybe a little more time, but I feel like every relationship has its own time and journey, and at the right time, it's time for a new season (for us)."

The couple hope to tie the knot by the end of the year.

In the comment section of her post, their celebrity pals such as Chantalle Ng, Jean Danker, Sonia Chew and Sharon Au sent their congratulations and well wishes.