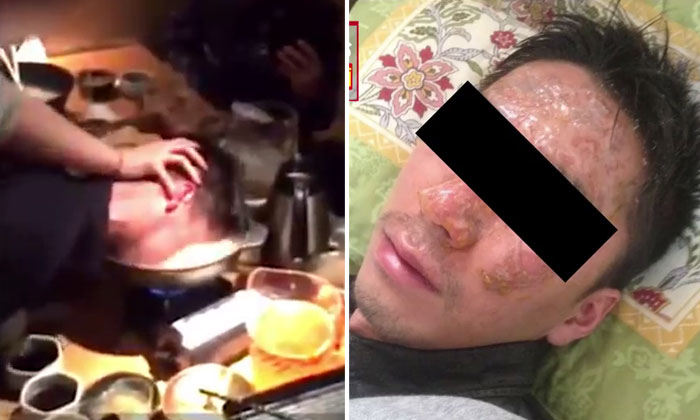 A former employee at a Japanese entertainment company is suing its president after suffering serious burns when he was pushed face-first into a boiling pot of soup during a company event.

The incident took place in December 2015, but gained attention again after media reports of the criminal lawsuit surfaced this week. A video of the incident was also reposted on YouTube by the Daily Shincho. It is not clear why it took three years for the worker to take legal action.

According to Apple Daily, the victim, then 23 years old, had his face shoved into a boiling pot of soup by the 25-year-old president of the company during a year-end party. Rather than save him, other colleagues cheered and one man could even be seen continuing to cook ingredients in the same pot.

Unsatisfied with the reaction, the boss was quoted as saying, "There are clients here, make it fun," before forcefully shoving the victim's face into the soup a second time. This time, the force was so great that the pot fell off the stove.

A photo of the victim's face in the aftermath showed painful blisters and scarring. When interviewed by Weekly Shincho, the president of the company claimed that the incident was "just a prank".

The victim has claimed that he had been constantly bullied at the workplace and had suffered emotional and physical distress since this incident. The burns on his face reportedly took around a month to heal.

The video has since gone viral on YouTube as well as Chinese microblogging site Weibo, where it has amassed four million views at the time of writing. Furious netizens have condemned the act of bullying and expressed their support for the victim in bringing the perpetrator to justice.

The incident was also highlighted in a recent study by Japan's Ministry of Health, Labor and Welfare which showed that workplace 'power harassment' by superiors has increased in the last decade.

Speaking about the incident, the man expressed his anguish: "When I see a hotpot, it reminds me of that time and it is painful."