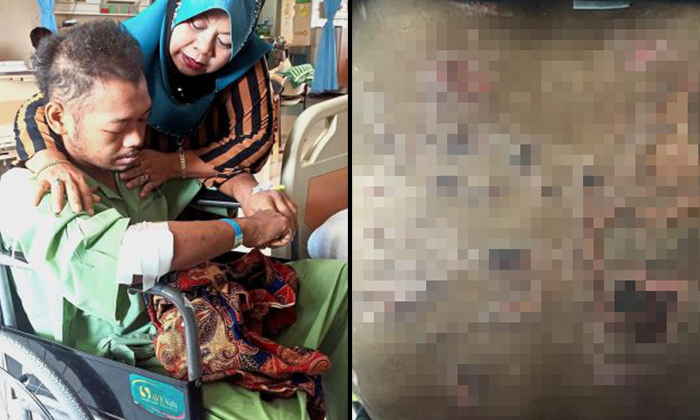 A 21-year-old Malaysian car accessories salesman-cum-workshop assistant, Nur Firdaus Ibrahim was starved and physical abused by his employer for months when he failed to meet sales target.

His boss not only used a water hose to whip him, but also caned him and even burnt parts of his body with a scalding hot exhaust pipe.

The torment caused Ibrahim’s body weight to plunge from 90kg to 70kg in just 3 months, reports The Star Online.

The victim had reportedly started working as a salesman cum-workshop assistant at a workshop in the mornings and continue selling car accessories under a makeshift tent at Taman Perling, Johor Bahru in the evenings.

The boss had previously warned Ibrahim not to use profits from car accessories sale to purchase food for himself, but Ibrahim had little choice.

“I don’t think he got any salary at all.

“That is why he had no choice but to use the sales money to feed himself.”

According to the heartbroken mother, the boss would also punch Ibrahim should he fail to achieve his daily sales target of RM150(SGD48) to RM200 (SGD64).

She said that many people had seen Ibrahim begging and crying for help during these torture sessions, but action was only taken after Ibrahim’s step sister, 35-year-old Norazlin Yusof ran into him last Saturday (Jan 7) at the tent where he was selling car accessories.

She was taken aback by how frail and emaciated Ibrahim looked, and wanted Ibrahim to come with her, but Ibrahim reportedly refused, afraid of the dire consequences should his boss find out.

She decided to report the incident to the police, and following investigations, the workshop address was uncovered.

“We then went over to bring him back.

“Since then, he has hardly talked about what he has gone through.”

Only after repeated questioning by his sister did Ibrahim finally confessed that the soles of his feet were burnt by an exhaust pipe, and his boss had whipped and brutalised him.

Ibrahim’s other sister, 24-year-old Siti Nur Aisyah, was also dismayed to discover that her brother had been forced to sleep on a cardboard box in the storeroom of the workshop.

“Besides sales, my brother also had to do repair and paint jobs in the workshop.”

What’s even more shocking was that the boss of the shop was an acquaintance of the family.

The plight of Ibrahim has gone viral since his story and photos were shared on Facebook.

The Malaysian Police has issued an official statement saying that they are looking for the boss and his wife to help with the investigation on the case.

The case is being investigated under Section 324 of the Penal Code for causing hurt with a dangerous weapon.

Watch a video on the incident below.

Related Stories
Man kicks soccer ball repeatedly at boy till his nose bleeds after he accidentally hits his daughter
Imagine if someone did this to your mum: Elderly woman viciously slapped and beaten by man at old folks' home in Malaysia
Maid hits, elbows and shakes employer's sickly 96-year-old mum who helplessly tries to defend herself in shocking video
abuse
shocking
tragic
Malaysian salesman tortured