Jail for vigilante who hit boy, 12, after wrongly accusing him of unlawfully cycling on track 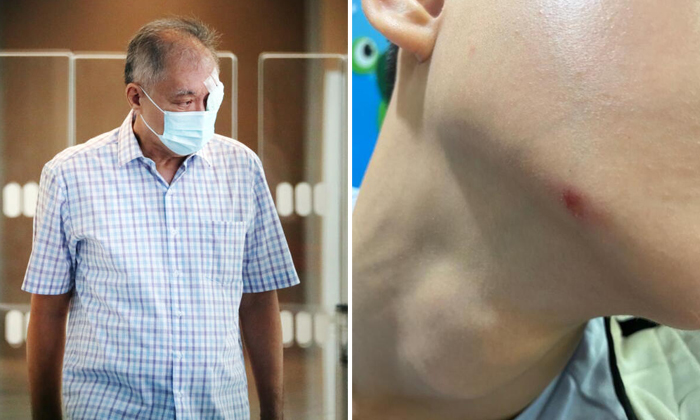 In a case of mistaken "vigilante justice", a man assaulted a 12-year-old boy he accused of unlawfully cycling on a track, though cyclists are permitted to use it.

The offender, Singaporean Chua Chek Yong, now 67, was on Thursday (Sept 2) sentenced to five days' jail after he pleaded guilty to an assault charge.

Describing the incident as one involving vigilante justice, District Judge Janet Wang said: "Plainly this is a classic case of bullying...(Chua's) concern was clearly misconceived."

The boy cannot be named as his identity is protected under the Children and Young Persons Act.

On Nov 13 last year, Chua saw the child cycling on the track near Block 438 Hougang Avenue 8 and told him that he should not do so.

The boy complied and cycled on a nearby pavement.

Chua again saw the boy cycling slowly on the track around 6.15pm on Nov 20 last year and confronted him.

He threatened to deflate the child's tyres if he spotted him cycling there again.

About 15 minutes later, Chua saw that the boy was still cycling on the track, and blocked his way.

Deputy Public Prosecutor Chong Kee En said: "The victim slowed down and stopped. The accused then told the victim to turn around and cycle away. The victim asked why he was not allowed to cycle (and Chua) challenged him to call the police.

"The victim tried to protest that the LTA (Land Transport Authority) permitted cycling on the track, and asked why he was not allowed to cycle, whereupon the accused said it was because 'I said', before stating 'Government said'."

Chua then pointed his finger at the boy's face and slapped him after exclaiming: "Don't argue with me."

The boy was recording a video of the incident with his mobile phone when Chua tried to grab the device and it fell to the ground.

The child was bending down to retrieve it when Chua rained punches on him.

When Chua walked away, a passer-by came forward to check on the boy.

The child phoned his father who turned up soon after. The father and the passer-by spotted Chua in the vicinity and confronted him.

Chua then asked for forgiveness, but the boy's father alerted the police.

The child later went to KK Women's and Children's Hospital, where he was found to have injuries, including a facial wound. Chua has since given $120 in restitution to the victim's father.

On Thursday, DPP Chong urged the court to sentence Chua to a jail term.

He said: "The accused was behaving as an absolute bully and in a thuggish manner. He had assaulted a young boy solely because the victim tried to indicate that he had a right to cycle on the track, which was in fact true."

Chua's bail has been set at $5,000 and he was ordered to surrender himself at the State Courts on Sept 16 to begin serving his sentence.

For assaulting a child below 14 years of age, an offender can be jailed for up to six years and fined up to $10,000.