Man who repeatedly punched and kicked cabby after refusing to pay fare gets jail, fine 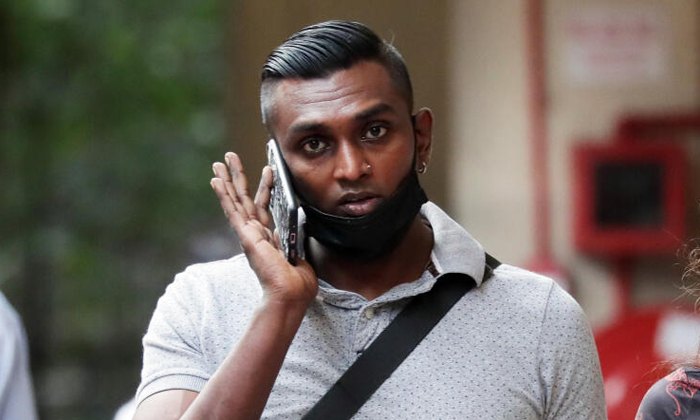 A delivery man who boarded a taxi with his girlfriend later assaulted the driver after refusing to pay the fare.

Vinod Raj, now 31, repeatedly punched and kicked the 52-year-old, who did not retaliate.

When the victim, whose name was redacted from court documents, went to Raffles Hospital for treatment, he was found to have injuries, including wounds on his left forearm and a swollen left cheek.

Vinod was sentenced to two weeks' jail and fined $2,000 on Tuesday (June 22). The Singaporean had pleaded guilty to one count each of assault, harassment and being a public nuisance.

The court heard that he and his girlfriend boarded the taxi in the morning of Sept 2 last year.

When the cabby was told to drive to "Amber Glory hotel" located "somewhere in Aljunied", he said he did not know its location and asked Vinod to guide him once they reached Aljunied.

The couple fell asleep in the vehicle soon after. When the driver stopped in Lorong 25A Geylang and woke Vinod up, the younger man was unhappy at being roused and the two got into a verbal dispute.

Vinod said they were not at the correct destination while the driver wanted him to pay extra to get to the hotel.

The couple got out of the taxi, with Vinod refusing to pay. The driver tried to stop him, and Vinod punched the man in the face before raining more blows on him.

A witness alerted the police at around 8am and officers arrested Vinod after arriving at the scene.

In an unrelated incident, Vinod hurled vulgarities at a group of police officers after his wife called for their assistance at around 6am on Nov 2 last year.

He is out on bail of $10,000 and must surrender himself at the State Courts on June 29 to begin serving his jail term.

Related Stories
Man told ex-GF to take off her clothes before pushing her out of moving van, then punched her repeatedly
Woman fined $5k for slapping 8-year-old girl who accidentally stepped on her foot
Twin brothers rained blows on policeman because they 'did not like his face'
More About:
assault
cabby
taxi driver
dispute
court