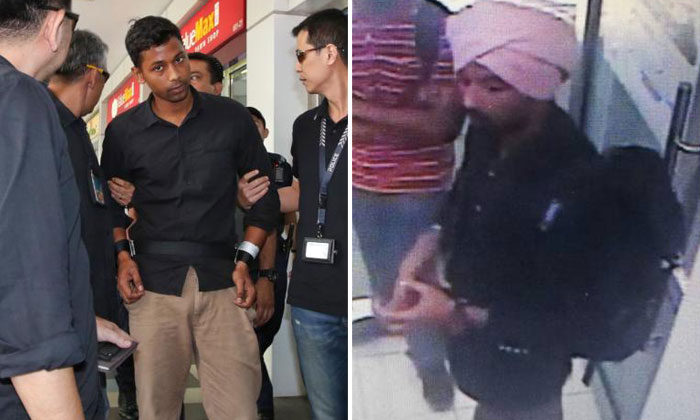 An immigration offender, who was facing money problems, armed himself with a chopper, fake gun and bogus bomb belt to try and rob a pawnshop in Boon Lay.

But former construction worker Sheikh Md Razan failed to coerce the employees of a ValueMax outlet in Boon Lay Way to hand him any valuables.

The Bangladeshi fled empty-handed but left behind his "bomb belt" during the failed robbery attempt on July 28 last year.

It prompted officers from the Bomb and Explosive Branch to be sent to scene, and exits at the nearby Boon Lay MRT station were also shut for more than two hours as experts inspected the device.

They were reopened after police found the "bomb belt" did not contain any explosives, a district court heard on Monday (Sept 30).

Razan, 30, was sentenced to 3 1/2 years' jail with 18 strokes of the cane after he pleaded guilty to one count each of attempted armed robbery as well as exhibiting the fake gun and "bomb belt" when committing the offence.

He also admitted to overstaying in Singapore for more than 200 days, being in possession of a forged work permit and using a second bogus work permit to seek illegal employment here.

She added: "The accused decided to disguise himself with a turban as he had observed that his Sikh roommate's face was partially covered when he wore his turban. He also thought that he could throw the police off his trail by disguising himself as a member of a different ethnic group."

On July 27 last year, he made the fake gun and "bomb belt" by using such items as a metal pipe and components from a battery-operated toy dog.

The court heard that he showed its employees the fake bomb before ordering them to place money and jewellery inside his bag. But none of the workers obeyed his orders. Instead, they tried to get away from him.

Realising his plan was falling apart, Razan removed the fake bomb belt from his waist, placed it on a counter and fled.

The outlet's branch manager, thinking the "bomb belt" was real, grabbed it and flung it towards an open space outside the shop before calling the police. Officers found the device was a fake.

Meanwhile, Razan changed his clothes and shaved off his facial hair to alter his appearance. To shake off the police, he also took four different buses and a taxi to get away.

He was arrested at Sultan Mosque on Aug 1 last year after a five-day islandwide manhunt.

On Monday, DPP Chua urged District Judge Teo Guan Kee to sentence him to at least 3 1/2 years' jail and 18 strokes of the cane.

She said: "While the accused may have failed in his planned heist, his actions caused considerable disruption and disquiet to the unsuspecting public. Exits at Boon Lay MRT station and Jurong Point had to be cordoned off and shut down for more than two hours as the authorities dealt with the threat from the accused's imitation bomb belt."

Defence lawyer Siraj Shaik Aziz, assigned to the case under the Criminal Legal Aid Scheme, said his "genuinely remorseful" client is determined to turn over a new leaf and restart his life in Bangladesh

Offenders convicted of attempting to commit armed robbery can be jailed up to seven years and caned.