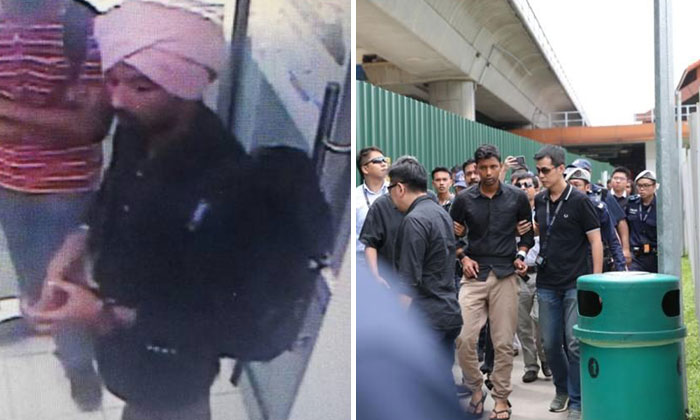 An armed robbery suspect who threatened to blow up a pawnshop near Boon Lay MRT Station during a heist on Saturday (July 28) was caught after a five-day manhunt.

The 29-year-old Bangladeshi national was arrested from Muscat Street in Kampong Glam, where he resided, at about 7pm on Wednesday (Aug 1) reports The Straits Times.

According to the paper, the suspect's name is Sheikh Md Razan.

He will be charged in court come Friday (Aug 3) with attempted armed robbery and exhibiting an imitation firearm when committing a scheduled offence.

During the armed robbery attempt which took place at about 4.30pm on July 28, the suspect had gone into the ValueMax pawnshop, threatening employees with a chopper and a replica gun.

He demanded that the employee handed over cash and jewellery in the store, but his demands were refused after the manager of the store took a look at his “gun” and recognised it as a replica.

Enraged, the suspect threatened to blow up the shop with an object which he claimed to be an explosive device. He then threw the object on the counter and fled without taking any items. The manager of the store immediately grabbed the “explosive” and threw it out of the shop.

Following that, the suspect allegedly escaped to a block of flats in Jurong West. There, he disposed of his clothing and turban, which he had used to disguise himself, placing them in a backpack that he then placed behind some potted plants outside a resident’s flat.

He also left in the backpack the chopper that he had used during the heist.

A resident spotted the backpack a few hours later and alerted the police.

Following up on the lead, police identified the man via police cameras.

Previously a construction worker, the man had overstayed in Singapore since December last year, the police revealed during a press conference on Thursday morning (Aug 2).

The replica gun, which the man claimed to have assembled using spare plastic parts, is yet to be recovered.

Mr Vincent Ng, the manager of the store, told Shin Min Daily News in an earlier interview that the suspect had stuttered and acted like a “child” during the attempted robbery.

He told The Straits Times:

“During a robbery, you would expect a fierce person pointing a gun or weapon directly at you, but he didn’t look very certain of himself.”

Mr Ng said that the suspect yelled that he needed money and ordered the staff to place money into a bag which he was carrying.

He also recalled the suspect flashing his replica gun, which was hidden in his jacket, twice.

“He kept taking it out and putting it back very quickly.”

After the foiled robbery, a manhunt for the suspect was conducted, involving officers from the Criminal Investigation Department (CID),

Deputy Commissioner of Police for investigation and intelligence Florence Chua, who also serves as the director of the CID said in a statement:

“The man went to great lengths to conceal his identity and cover his tracks to evade detection and arrest. (Thus), this case required meticulous police work and the combined and coordinated efforts of officers from various Singapore Police Force units, working tirelessly round the clock to pursue all available leads to successfully arrest the man.”

Thanking the resident who alerted the police to the bag, Ms Chua added that the lead might have expedited the arrest, but the police were also combing the surveillance camera footage to locate the suspect, and it would have “been a matter of time” before they found him on their own.

For armed robbery, the suspect faces between two and seven years’ jail, with at least 12 strokes of the cane.

If convicted of exhibiting an imitation firearm when committing a scheduled offence, the suspect would be jailed up to 10 years.