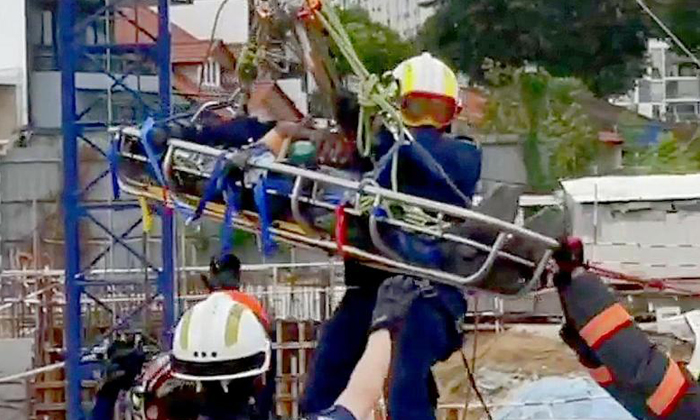 A dramatic rescue operation unfolded on Monday at a condominium construction site off Bartley Road after a worker injured his leg while conducting troubleshooting work on a 40m-tall crane.

Caught by a moving part of the crane, the Bangladeshi worker, 46, had to be rescued by Singapore Civil Defence Force (SCDF) officers in an operation that lasted more than an hour.

In a Facebook post yesterday, SCDF said firefighters and specialists from its disaster assistance and rescue team (Dart) were deployed to a construction site in How Sun Drive at 4.25pm.

A team of four Dart specialists climbed the crane using a cat ladder and moved across the crane's narrow arm to reach the injured worker.

Securing themselves in place, they set up a lowering system involving ropes and pulleys.

A member of the team, who is cross-trained as an emergency medical technician, treated and bandaged the worker's wound while suspended 40m in the air.

Meanwhile, another Dart team on the ground attached a stretcher to a rope deployed by the team on the crane.

Both teams then hoisted the stretcher up to the injured worker.

After securing him firmly on the stretcher, a Dart specialist on the crane attached himself to the stretcher and both were slowly lowered to the ground.

The Ministry of Manpower told The New Paper last night it is investigating the incident.

The worker, an employee of Capital Cranes Global, suffered a laceration on his left inner thigh and was taken to Sengkang General Hospital.

The worksite's developer is SingHaiyi Huajiang Sun, a subsidiary of SingHaiyi Group, and the occupier is China Construction (South Pacific) Development.

It is the project site for The Gazania, a 250-unit freehold condominium comprising seven five-storey blocks.

Launched in April last year, it is due to be completed in the second half of 2022.

In a statement to TNP, the management of SingHaiyi Group said it was unable to comment further as investigations are currently being carried out by the relevant authorities.

He wrote on Facebook: "Am so proud of you guys."