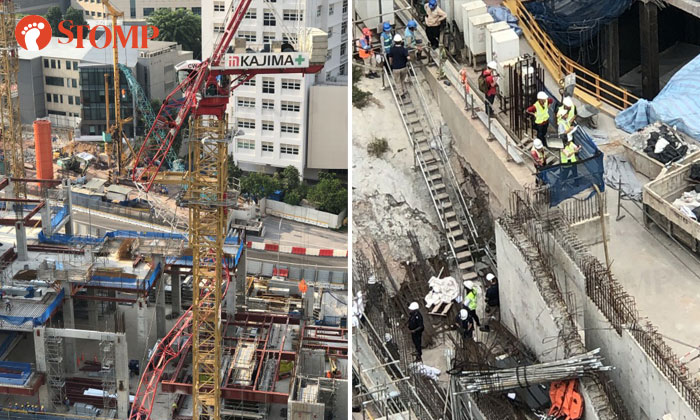 A 28-year-old worker died after a tower crane collapsed at a construction site at Jalan Tan Tock Seng on Monday morning (Nov 4).

Another worker, a 35-year-old man, was injured and taken to Tan Tock Seng Hospital (TTSH).

Stompers Yew Thong and Tan alerted Stomp to the accident and shared photos of the scene.

The Singapore Civil Defence Force (SCDF) told Stomp it responded to a call for assistance at the worksite at 8.50am.

"A boom of a tower crane had collapsed at the construction site," an SCDF spokesman said.

In response to a Stomp query, the police said they were alerted to the industrial accident at 8.49am.

"A 28-year-old man was found lying motionless and was pronounced dead by paramedics at the scene," a police spokesman said.

"Another man, aged 35, was conscious when conveyed to TTSH."

According to The Straits Times, workers at the site said the dead man was an Indian national and the injured worker, a Bangladeshi, was hurt in the leg.

The crane was carrying around 300kg of scaffolding material when it collapsed on both men, who were on the ground.

The Indian national was found to be unresponsive and the Bangladeshi suffered leg fractures.

The Ministry of Manpower (MOM) said the deceased was employed by LKT Contractors while the injured man's employer is BHCC Construction.

A new 17-storey 500-bed rehabilitation complex, which is part of TTSH, is being built by the Ministry of Health (MOH) at the worksite. Construction started in March 2017 and is scheduled to be completed by 2022.