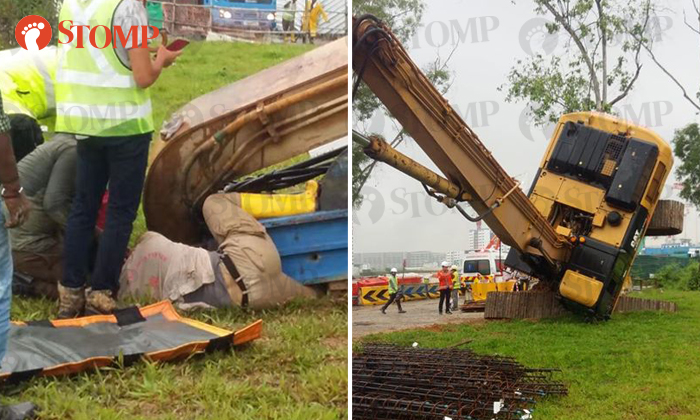 A man was rescued and taken to hospital after getting his leg trapped by a toppled excavator at a construction site in Tampines on Tuesday (Dec 17).

Responding to a Stomp query, the Singapore Civil Defence Force (SCDF) said it was alerted to a rescue incident along Tampines Avenue 9 at around 11.10am.

Upon SCDF's arrival, a man was found with his leg pinned by an excavator that had fallen.

Paramedics stabilised the person while another excavator was used to release his trapped leg," said the SCDF, who then conveyed the victim to Changi General Hospital.

Stomper Anonymous submitted photos of the worksite accident, showing a yellow excavator that had toppled over.

A man is seen lying on the grass patch with his leg trapped underneath the excavator, while other workers surrounded him.

An orange excavator, which was used during rescue efforts, can also be spotted at the scene.

The Ministry of Manpower (MOM) confirmed with Stomp that it was informed of the accident and added: "An excavator toppled during a lifting operation and injured a worker’s left leg.

"The worker is receiving treatment at Changi General Hospital.

"The developer is the Housing and Development Board and the occupier is Huationg Contractor Pte Ltd. The employer is Drill Gems Engineering Pte Ltd."

The MOM also said it is investigating and has stopped all excavator operations.