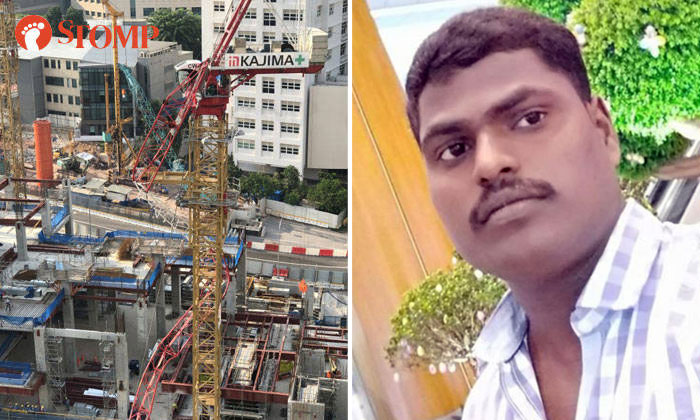 Upon learning that his wife in India was pregnant with their first child, Mr Muthaiyan Velmurugan was so elated that he immediately made plans to return home in two months.

But that was not to be. On Monday (Nov 4), the 28-year-old Indian national was killed in a worksite accident in Novena when the horizontal beam of a tower crane collapsed while lifting around 300kg of scaffolding material. Mr Velmurugan was believed to have been hit by the falling material, and was pronounced dead at the scene.

Speaking to The Straits Times at the undertaker's, where some of Mr Velmurugan's friends had come to pay their last respects, his cousin said Mr Velmurugan had learnt about his wife's pregnancy just last month and was "very excited" about it.

He had taken a six-month-long break to get married in India, and had been back in Singapore for just three months before the accident happened, said the cousin, who is also a worker here. He declined to be named.

Mr Velmurugan was employed by LKT Contractors, and he had been working on an upcoming rehabilitation hub in Novena that will be part of Tan Tock Seng Hospital.

Another worker, a Bangladeshi, 35, was injured in the same incident.

The Manpower Ministry and the police are investigating.

Mr Velmurugan's family, who live in a village in Tamil Nadu, is distraught by the news, said his cousin. Mr Velmurugan, the elder of two sons, was the sole breadwinner.

Breaking into tears, he said he had been close to his cousin, and the two would spend most of their days off together.

"Deepavali was the last time we were together," he said.

Mr Velmurugan's body will be flown home to India on Wednesday night, accompanied by his cousin.

A fundraising campaign for his family has been started by Ms Dipa Swaminathan, 48, founder of ground-up initiative ItsRainingRaincoats, on the online crowdfunding platform Give.asia.

"It broke my heart to see what has happened to him," said Ms Dipa.

The campaign will run for about a week, and she plans to entrust the money to Mr Velmurugan's cousin.

"We will stay in touch to make sure the monies go to the young wife," she added.