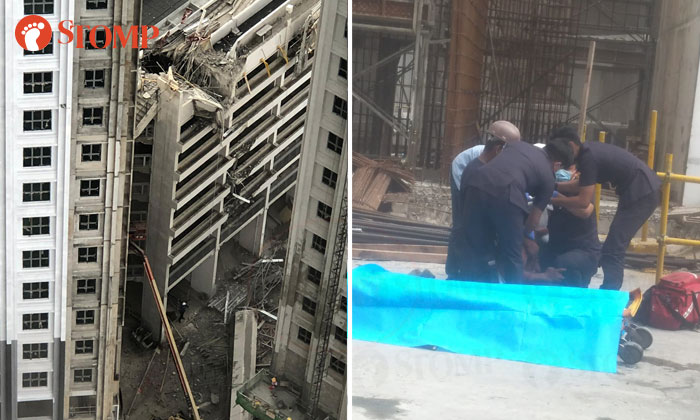 A construction worker was taken to hospital after a large concrete beam collapsed at a construction site for Build-to-Order (BTO) flats in Queenstown on Saturday afternoon (Mar 2).

Stomper Juwiezy, who lives not far from the site at 132 Margaret Drive, told Stomp she heard a "loud thump" at about 4.40pm.

Several other Stompers shared photos taken at the site that have been circulating online.

The Building and Construction Authority (BCA) said in a Facebook post that a precast beam from the link bridge had fallen and a worker was injured by the debris.

The worker was taken to hospital for treatment.

BCA said that it would be issuing a stop-work order at the construction and are investigating the incident.

According to The Straits Times, a BCA spokesman said that the precast beam from the link bridge of the building had fallen from the 27th storey onto the roof of a seven-storey carpark below it, before it fell off the edge of the building and landed on the ground.

The Housing Development Board (HDB) said in a Facebook post that all construction works have stopped so that they can conduct a thorough investigation of the incident.

"Our engineers have assessed the site and confirmed the structural integrity of the buildings is not compromised," it said.

"We are also working with the contractor to render all possible assistance to the injured worker."

The Singapore Civil Defence Force (SCDF) said in a statement that it had responded to the incident at about 4.35pm.

A construction worker suffered head injuries and was taken to National University Hospital in an ambulance, said the SCDF.

It added that it has completed its search operations at the construction site and no other injuries were reported.