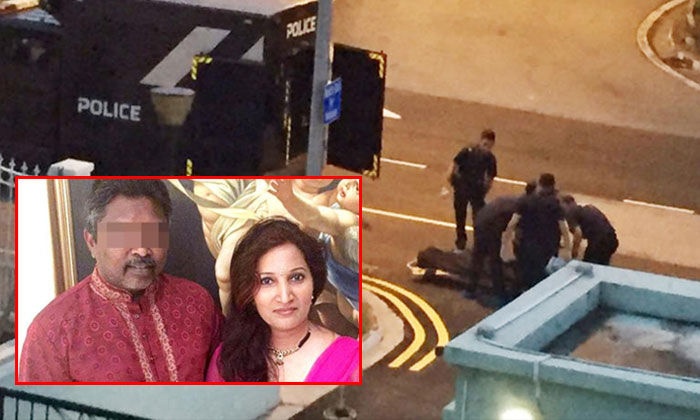 A businessman went on the run for about 10 hours after allegedly stabbing his 44-year-old wife to death and was later arrested.

The purported incident took place at a condominium in Jalan Loyang Besar yesterday (Oct 27) at around 12am.

It is understood that the deceased, Raithena Vaithena Samy, 44, was discovered in the bedroom unit of the condominium.

The couple has a daughter and the family has stayed in the condominium for around two to three years.

A neighbour recalled hearing sounds of a quarrel, as well as a girl crying at about 11pm on Oct 26.

However, she was uncertain as to where the noises came from.

Another resident revealed that the couple had been loving but about a year back, their relationship seemed to have soured.

“Although I never saw them quarrel, I haven’t seen them out together for about two to three months.

“They would head out by themselves.”

Shin Min Daily News understands that the two were quarrelling during the time of the incident.

The suspect, enraged, allegedly grabbed a knife and lunged at the victim, stabbing her multiple times. The victim bore a deep wound on her chest.

The suspect fled subsequently. He is understood to have entered Malaysia via the Causeway.

Around 10 hours after the incident, he returned to Singapore and surrendered himself at Woodlands Checkpoint, where he was then arrested.

In response to media queries, a police spokesman said that they received a call for assistance at Loyang Gardens at 12.12am, and the victim was pronounced dead on site yesterday (Oct 27) at 12.25am.