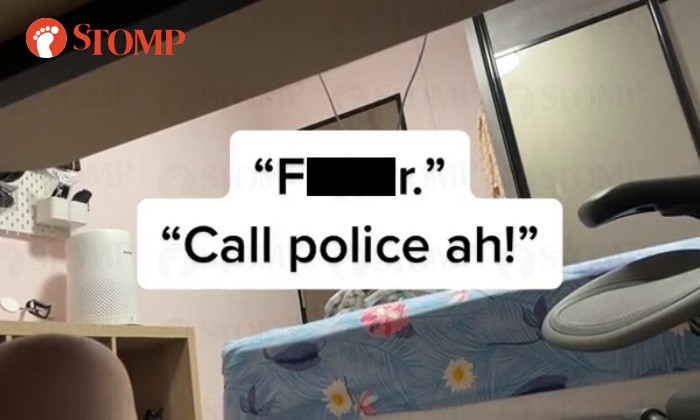 His family never imagined the horrors they would endure from their neighbours upstairs when they moved into their Hougang Avenue 8 flat last year.

Stomper J said that it started in March.

"At first, it was the sound of stomping throughout the day and night," he said.

"There were some days when I would be told to 'shut up' when I sneezed. And this was at 11pm in my own room.

"There was also an instance over the weekend at 8pm where they turned on the power drill, with its accompanying sound of 'drrrrr' reverberating throughout the flat.

"Next came the renovation weeks. I define them as such as we would often hear drilling and hammering lasting all the way until 7pm to 8pm daily.

"There were occasions when we shouted back and told them to observe the laws set by HDB for renovation works. But these would not stop until we went up to speak with them.

"We were greeted by a slim and petite woman with short straight hair who 'apologised' and mentioned she 'didn't want any trouble' with the authorities, and that she would get them to stop. She also promised that the works would cease within the next few days.

"We took the opportunity to bring up the noise pollution caused by their family and this, in turn, evoked our suspicion that they were subletting the apartment to multiple tenants due to the way she phrased her wording of asking 'them' to stop with the noises.

"She had also previously come down to 'warn' us about the possibility that our toilet may start leaking and would come down the next day to check again. This was the very first instance of these neighbours entering our apartment to 'check' on the water leakage. Right on target, the leaking did happen and we called HDB to inform them of the damages.

"The very next day, she came down with her husband and a group of men in heavy tattoos, questioning in a threatening manner if we had raised a complaint with HDB.

"On the contrary, this wasn't so much of a complaint as we needed to check back with them on the next steps to take considering the pipes were legally the property of HDB.

"There was also another night where the group of men in heavy tattoos came down for a second look afterwards. Looking back, this was all a really bad idea as these people now had an idea of which room belonged to whom and could further premeditate when to strike with their shenanigans and antics.

"Of course, the sounds of objects dropping and purposeful knocking started becoming isolated to my room which was adjacent to my mother's room and the knockings would get very loud in the wee hours of the night. 'Tap tap tap tap tap' in multiple consecutive successions. At night, our block gets eerily quiet so these sounds become greatly amplified and can be heard throughout the living room, my mother's room and the kitchen.

"Unfortunately, these instances would only escalate into something worse. In the past month right up to the time of writing, we have been subjected to further harassment throughout all periods of the day, every day without fail by the neighbours living above us."

The Stomper said a man could be heard "cursing us out" with obscenities. "It was always the same person, repeating these words every minute. His behaviour led us to believe he might be mentally ill as we've never experienced a moment of peace," said J.

"There were times when I wanted to sneeze, but had to endure it out of fear that the person would come back to hurl more vulgarities at us.

"You might be rolling your eyes and thinking this story is all fabricated and a load of hogwash, but due to the nature of our apartment's material; there are areas of our apartment where the wall is hollow enough that sound traverses through easily.

"To further add to this, the neighbours from hell have knocked down their walls and turned their apartment into an open-space concept with sliding doors, weakening the reinforcement where sound travels so they are able to hear every conversation we're having. It's frightening enough to the point where my mother, grandmother and I have to communicate in hushed whispers daily and it makes us feel oppressed.

"We have reported to the HDB and police about these incidents, even going so far as to visit and write into our MP, Darryl David, all the other MPs of Ang Mo Kio GRC, the President and even Lawrence Wong for help, but they could only throw the matter around to other agencies.

"We've also made a Magistrate's Complaint and attended the first hearing and supposedly it would be followed up with a mediation session.

"As I write this, the neighbours are throwing a fuss, cursing and mocking us with the same slurs in greater intensity. All of this is taking a toll on our family's state of mind and well-being.

"We are also looking into places to rent for the time being as this issue is growing out of proportion with their harassment and bullying. We need help and are not getting any aid from the governing bodies except for tone-deaf and template responses. All I can say is that our family is really, honestly truly exhausted and would like all of this to stop."

The Stomper said he had recorded incidents of harassment and posted them on Tiktok.

In response to a Stomp query, the police confirmed that reports were lodged and are looking into the matter.