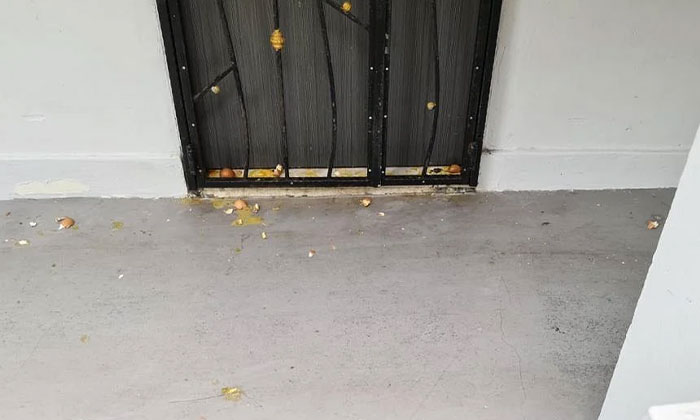 While a woman who threw eggs at her next-door neighbour and destroyed a surveillance camera did not target residents of other units in her block, they said they made sure that they did not incur her displeasure.

On Wednesday (July 20), Jasmine Lau Jie Min, 21, was ordered to undergo reformative training for at least six months after she pleaded guilty to six charges for offences including harassment, mischief and theft.

According to court documents, three men were residing at the next-door unit of a Housing Board block in Circuit Road at the time of the offences.

When The Sunday Times visited the 10-storey block on Thursday (July 21), residents, who did not want to be identified, said though Lau's actions were directed at the occupants of the unit next to hers on the ground floor, they were also affected.

Lau admitted to throwing various objects at the unit on Oct 27 last year, including items which appeared to be eggs.

She also admitted to splashing oil, black sauce and white liquid and throwing pieces of food and a white powdery substance on March 8 this year.

A woman who has been living in the block for five years said: "There would be a strong smell whenever you walk past (the unit she targeted)."

She said Lau was a friendly person before a family incident occurred two or three years ago. Her behaviour changed after that, and the resident noticed that the occupancy of the affected unit changed three times.

In 2020, Lau was given a day reporting order for various acts directed at another man who was living in the unit then, such as filling the keyhole of his main gate with superglue. This order meant that she had to report to a day reporting centre for monitoring and counselling. The man has since moved out.

A mother of a five-year-old son, who has been living in the block for six years, said she was concerned for his safety because of Lau's actions, and looking to move partly because of this.

She added: "Kids tend to be a bit rough, so I will remind my son not to knock into her door because I won't know what may happen if he accidentally (does so).

"Whenever we bring my son to school, we try to avoid walking past that area and take a longer route. I will also make sure he keeps quiet when we walk past."

When The Sunday Times spoke to a current resident of the affected unit on Thursday, she said her family had just moved in a month ago. She was unaware of any disputes in the block.

MacPherson MP Tin Pei Ling told The Sunday Times that she was notified about Lau's actions by the owner of the affected unit early last year.

She referred the case to the police and the Agency for Integrated Care.

Both agencies followed up actively on the case, said Ms Tin, and the situation would get better for a while, but she would receive e-mails again saying the issue had resurfaced.

The most recent e-mail from the owner came in March this year, after which other agencies were roped in to help.

According to court documents, following a verbal altercation with her neighbour on March 9 this year, Lau swung a metal spanner at the windows near the front entrance of his unit, causing them to shatter.

Ms Tin said her team will help Lau to integrate with the community after she finishes her reformative training stint.

"We will be talking to the agencies to find out more how best we can help because they would have a professional assessment... We'll see what we can support.

"We have a diverse community, we value harmony and coexistence. If there are difficulties, we hope neighbours can give and take, and if the issues escalate, whether it's the grassroots, myself or the agencies, we will do what we can to try to help," she added.

"There will be times where patience and understanding is needed, we all need to coexist. It is a constant strive towards harmonious community living, but we will try our best, and we will work with the agencies where necessary."