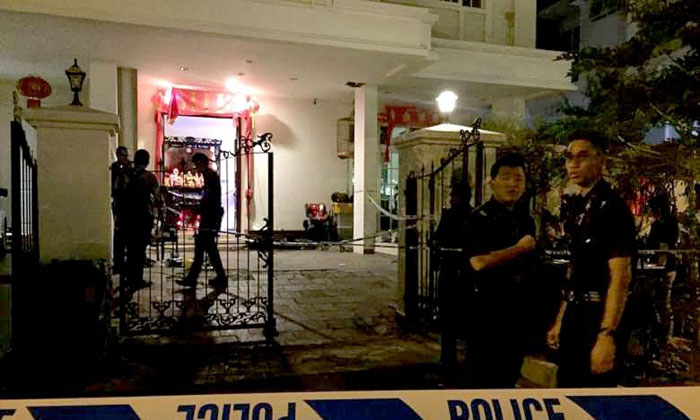 A month after starting work for a family in Telok Kurau, an Indonesian maid became so homesick and filled with longing for her lover in Hong Kong, that she hatched a "ruthless plan" to kill her employer.

Daryati, 26, wanted to get her passport that was kept in a safe and to steal money from a locked drawer so that she could return home, prosecutors told the High Court on Tuesday (April 23) on the first day of her murder trial.

She is facing the death penalty for stabbing and slashing Madam Seow Kim Choo on June 7, 2016, leaving the 59-year-old woman with 98 knife wounds, most of which were on her head and neck.

In opening its case against Daryati, the prosecution cited her own words that she had written in her diary.

The translated entry read: "I must carry out this plan quickly. I have to be brave even though life is at stake. I am ready to face all risks/consequences, whatever the risk, I must be ready to accept it. I hope that this plan succeed and run smoothly.

"My employer's family is my target DEATH!!!"

Deputy Public Prosecutor Wong Kok Weng said these chilling words were in effect an "ex-ante" (a Latin phrase meaning "before the event") confession of the "brutal and cold-blooded" killing which she would eventually perpetrate.

He said the prosecution will rely on Daryati's police statements, in which she confessed to, among other things, slitting Madam Seow's neck and stabbing her multiple times.

Daryati started working for the family on April 13, 2016.

Her passport was kept in a safe in the master bedroom and only Madam Seow and her husband, Mr Ong Thiam Soon, then 57, had the keys.

Madam Seow also held the keys to a drawer on the first floor, where cash was kept.

The DPP said Daryati devised a plan to kill Madam Seow as early as May 12 so that she could retrieve her passport, steal money and return to Indonesia.

Daryati roped in the second maid in the household to help, but did not say that the plan involved murder.

She told the other Indonesian, Ms Don Hayati, 27, to distract Mr Ong and then turn off the closed circuit TV and electricity supply, so that they could steal money and escape while he was trying to restart the power.

She also told Ms Hayati to alert her when Madam Seow's brother came to the house, having observed that he would bring large amounts of cash whenever he visited.

In her diary on June 2, Daryati drew a map of the house, plotting the path she would take to get her passport and her escape route.

In the days before she stabbed Madam Seow, whom she later described to police as "a very nice person", Daryati hid weapons on the second floor of the three-storey house, the DPP told the court.

The knives were intended to be used to attack Madam Seow and the hammer to hit daughter-in-law Rowena Yeo if she came down from the third floor, said the DPP.

On June 7, Daryati carried out the plan after she verified that Madam Seow's brother came by and was counting cash on the first floor.

She made her move only after Madam Yeo, then 24, and her two children had gone up to the third floor, and after Madam Seow's brother and two sons had left the house, said the DPP.

Hiding a knife in her clothing, Daryati went up to the master bedroom with a pair of trousers she had ironed for Madam Seow.

On her way up, she said "jaga bawah", or guard downstairs, to Ms Hayati, who has not been charged over her involvement.

After handing Madam Seow the trousers, Daryati whipped out the knife and demanded the return of her passport.

When Madam Seow shouted, Daryati dragged her employer to the toilet, closed the door and repeatedly slashed and stabbed her neck, head and face until the older woman collapsed on the floor.

To ensure Madam Seow was dead, Daryati retrieved the short knife she had hidden under the sink, squatted down and repeatedly stabbed her employer in the neck until she was motionless, said the DPP.

"The accused had clearly intended to cause the death of the deceased by her vicious attack," said the DPP.

By this time, Mr Ong had entered the master bedroom and was calling out for his wife.

As there was no response, he became worried and used a screwdriver to open the toilet door.

When the door opened, Daryati attacked Mr Ong by stabbing his neck. He managed to disarm her but when he went to check on Madam Seow, Daryati retrieved the knife and stabbed him on the neck a second time.

Mr Ong eventually restrained Daryati and tied her hands with cable ties. He then took her out to the main gate, where three passers-by helped watch over her while he checked on Madam Seow.

Madam Yeo called for an ambulance at about 8.50pm. Paramedics pronounced Madam Seow dead at about 9.05pm.

The court heard that after Madam Seow’s sons returned home, younger son Andrew, then 34, was so agitated that he punched Daryati and had to be restrained by police, while older son Wei Yang, then 35, shook his mother’s body and shouted at her to wake up.

An autopsy report stated that she died from multiple incised and stab wounds to the head and neck.

A psychiatric report said Daryati was suffering from adjustment disorder at the time but this did not amount to a major mental disorder that would diminish her responsibility for her actions.

Daryati, who is defended by Mr Mohd Muzammil Mohd, also faces a second charge for the attempted murder of Mr Ong, but it has been stood down for now.

Mr Muzammil told reporters that he will be challenging the admissibility of her police statements, and calling a forensic pathologist from Indonesia and a local psychiatrist as expert witnesses.

The trial resumes on Aug 13.

Related Stories
Woman allegedly killed by her maid was 'an easygoing person and kind boss'
Man whose wife was allegedly killed by maid: She slashed my neck, I was in shock
Woman found dead in Telok Kurau semi-D: 23-year-old Indonesian maid allegedly stabbed her to death
More About:
murder
slashing
maid
court