Man whose wife was allegedly killed by maid: She slashed my neck, I was in shock 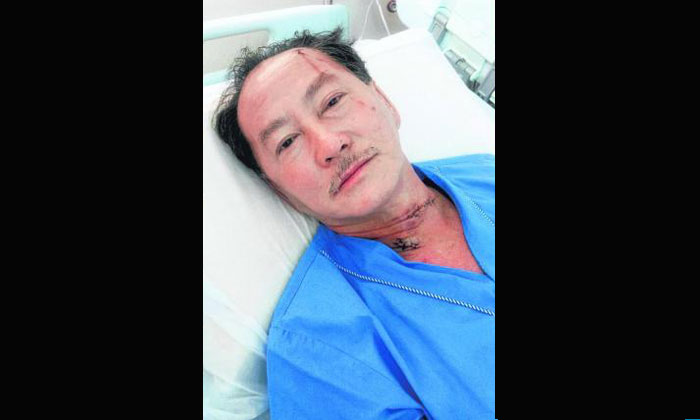 Businessman Ong Thiam Soon went looking for his wife in their semi-detached house in Telok Kurau when she did not come into their bedroom to watch television as usual on Tuesday night.

"I kept shouting her name but there was no response," said Mr Ong, who left his room on the first floor and found a bathroom on the second level locked.

He unlocked it and saw a trail of blood. Before he could process the scene, Daryati - his maid of two months - allegedly attacked him with a knife in each hand.

"She slashed my neck. I was in shock," Mr Ong said in Mandarin. It was then that he noticed his wife's bloodied, motionless body on the bathroom floor.

He was speaking to reporters from Changi General Hospital (CGH), where he was sent for surgery after his Indonesian maid allegedly stabbed him and his 59-year-old wife, Seow Kim Choo. His wife died, and Daryati was arrested.

The 57-year-old said he tried to hold down Daryati, but she struggled hard. "When (Daryati) finally calmed down, I went to my wife but she was no longer breathing. There was a lot of blood."

Daryati, 23, allegedly lunged at him again, and they continued to tussle. Mr Ong shouted for his daughter-in-law, who was taking care of his two grandchildren on the third floor.

Hearing the commotion, his other maid rushed to the bathroom but ran away screaming after she saw the gruesome scene. Mr Ong's daughter-in-law called the police before going to his aid.

They managed to subdue the maid and tied her hands. Mr Ong, with Daryati in tow, then ran out of the house, shouting for help.

He caught the attention of passers-by who helped him restrain Daryati. Three Malaysians helped to bind the maid with a cable tie found in the house, and also took towels to stanch Mr Ong's bleeding.

The maid agency that brought Daryati in told The Straits Times it had not received negative feedback on her performance during her time with the Ongs. A spokesman said this was her first time working as a maid.

On Tuesday night, the police received a call for help at 8.48pm. Paramedics pronounced Madam Seow dead at 9.03pm.

Mr Ong underwent surgery for multiple injuries on his neck, forehead and leg at CGH. He was expected to be discharged yesterday.

Mr Ong said Daryati, who is allowed one phone call home every month, had been "agitated" for the past few days because she could not reach her family in Indonesia.

"We treat her very well and give her a lot of freedom," he said, adding that he does not know what sparked her violent behaviour.

Police have classified the incident as murder, and are investigating.