Heroic Stomper Stone who helped multiple accident victims: "You don't have to be a genius" 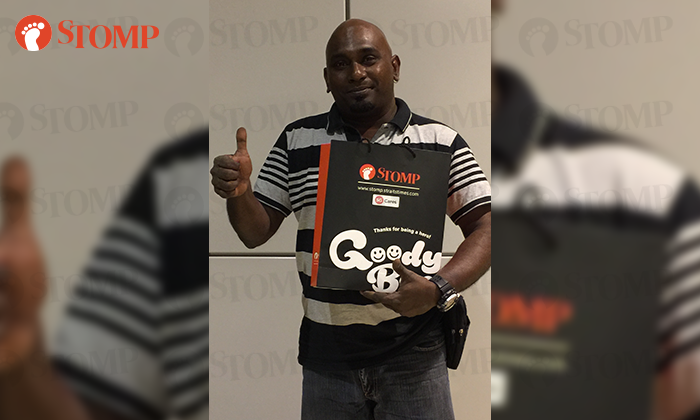 Many of Stomp readers may be familiar with Stomper Stone and stories of his heroic feats on our website.

Stomper Stone, a Malaysian, has been working in Singapore for the last 20 years.

As a motorcyclist who travels frequently between Johor Bahru and Singapore, Stone has come across his fair share of accidents, many of which he rendered his assistance.

His heroic feats vary from pulling a trapped driver from an overturned car to administering CPR on victims and directing the traffic at an accident site.

For Stone, the bottom-line for each of the situation was the lives of the victims.

“Small things can make a difference between a fellow dying or living.

“For example, during the accident where the car overturned, few people stopped simply because it was raining.

“The driver suffered a concussion on his head and could have needed medical attention.

“That’s why he was so happy and shocked to see me.”

Growing up in a family where many members are in the medical line, Stone inherited their passion for first aid.

For Stone, it was not the knowledge that excited him, but rather being on the ground to help.

Although Stone ultimately chose to be an engineer, the passion burns as fiercely as ever, and he has been in the first aid teams of all the companies he worked for the last two decades.

When asked whether he was worried if others may view his feats as an attempt to hog the limelight, Stone said:

“It’s important that I film down the process so that people know what’s going on.

“In the accident with the three bikes near Gelang Patah zone on the Malaysia–Singapore Second Link, it was a high-speed lane, and the cars were moving at an incredibly fast pace.

“I did a Facebook live video, so if something had happened to me, at least people would know what happened and how to carry from there.

“Furthermore, I feel the videos help to promote the act of helping others to others out there.

“Many of my friends have seen my videos and told me that they were inspired to help out if they bump into a familiar situation.”

The most important skills to save a life in those situations are surprisingly very easy, Stone added.

“You don’t have to be a genius, you just need to want to help.

“If you see someone in those situations, just check for their breathing first.

“Administer basic CPR if you know how to.

“Even if you don’t you can simply flip them over into a recovery position, where it is easier for them to breathe.

“Never let them lie on their back or sleep.”

According to Stone the second most important thing is knowing the exact location of the accident site as well as the hotlines to call during an emergency.

“When you just tell the operator about an accident on the link way, they won’t be able to locate you fast because the link way is so long, and traffic can be challenging at peak hours.

“Knowing the correct zone saves precious time for the victim and the ambulance.

“More importantly, you need to know who to call.

“The number to dial for emergency services in Malaysia is 999, unlike that in Singapore, which is 995.

“Many people are mixed up especially Singaporeans in Malaysia, or vice versa.

“Even Malaysians can get mixed up after working a while in Singapore.”

To better prepare themselves for times like these, Stone also recommends keeping basic tools such as a small first aid box, torchlight, or jumper.

These tools can be handy not just for the user, but prove invaluable in incidents when lives are at stake.

“Let’s say if you don’t have bright blue lights to warn the oncoming traffic of an accident site ahead, you could make use of a torchlight.

“It’ll help prevent the victims from getting run over by oncoming traffic again.

“Even if you don’t have basic tools though, you can improvise.

“For example., one friend asked me recently what happens if I see someone with blood bursting out from their injury.

“I told him even if you don’t have a bandage, just take off your shirt, wrap around the wound and apply pressure to slow the bleeding

“The most important thing is to do something.”

Stomp presented Stone with a Stomp Goody Bag as part of our efforts to recognise everyday heroes and highlight heartwarming deeds.