Biker who pulled trapped driver from flipped car in JB: "It's ok to be kaypoh" 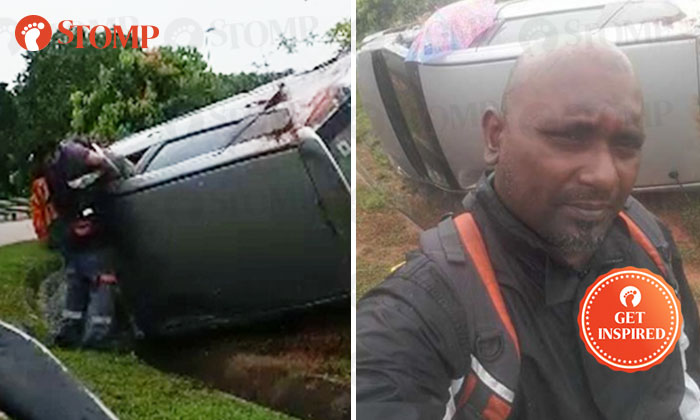 A car flipped onto its side, with its driver trapped inside near Horizon Hills, Bukit Indah in Johor Bahru today (Sept 11) at around 11.30am.

Stomper Stone who was riding on his motorbike towards the Malaysia–Singapore Second Link stopped to take a look, curious at what there were no barricades erected around the vehicle.

According to Stone, the car had toppled in such a manner that the trapped driver wasn’t visible to passing motorists on the road.

The heavy rain also deterred by-passers from stopping to investigate.

He whipped out his phone and took a selfie.

To his surprise, he realised that the driver of the car was still trapped inside.

He quickly opened the vehicle door and pulled the driver out.

Other passing motorists, upon realising the situation, stopped to render assistance.

The driver told Stone and the other motorists that he had just sent his daughter to school when his vehicle skidded and flipped onto its side.

He was dizzy, having received an impact on his head.

The group quickly called the Police and emergency services for help.

Stone also tried retrieving the keys from the ignition switch on the vehicle but found that it was stuck.

Within 15 minutes, the Malaysian Police and an ambulance arrived at the scene.

After that, the driver hugged each motorist in the group a hug before he was ushered onto the ambulance.

“I didn’t see the car flip since it was around a bend.

“It could have just been a minute ago.

“There were so many people passing by, but no one stopped as it was raining.

“I think in situations like these, it’s okay to be kaypoh.

“If I hadn’t been, I would never have discovered the driver.