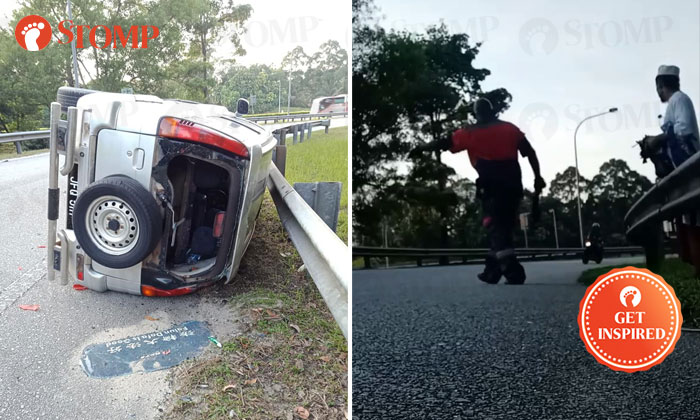 Many Stomp readers may be familiar with Stomper Stone, who is no stranger to helping others out.

On Monday morning (Apr 8), he assisted a driver whose SUV overturned along the Second Link Expressway in Malaysia, at the exit heading towards Horizon Hills from Tuas.

"The SUV flipped over at about 7.15am," said the engineer who was on his way home from work.

"I got down to wave and alert other motorists coming around the corner.

"I was worried other people coming back from their night shifts might collide into the SUV.

"I was there for about 20 minutes until rescue vehicles arrived."

Stone told Stomp that the driver of the SUV was unhurt but a little "traumatised".

Previously, Stomp presented Stone with a Stomp Goody Bag to recognise his kindness and helpfulness to others.

From pulling a trapped driver from a car to rendering assistance to fallen riders, the Malaysian said he has a passion for first aid.

By sharing his experiences on video, he believes that they serve as important evidence to those involved and helps to promote the act of helping others