Heroic doctor helps yet another injured biker, this time at Lower Delta Road 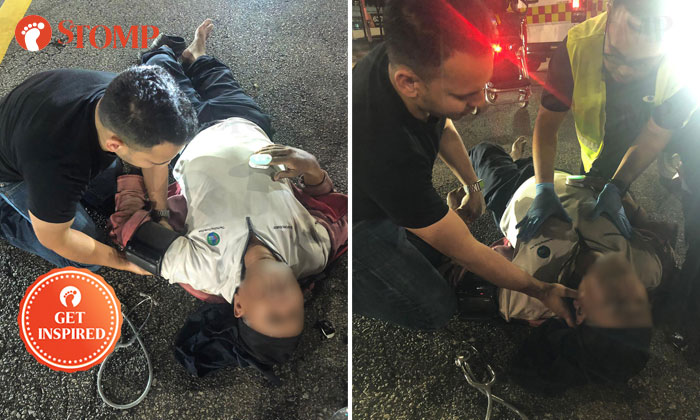 A doctor came to the aid of a biker who was involved in an accident with a car at the junction of Jalan Bukit Merah and Lower Delta Road on Aug 24.

Stomper Shirlyn was driving along Lower Delta Road when she saw a man lying on the road.

"I stopped my car to see if he needed help and saw that people were already tending to him," she said.

"I recognised one of the people as Dr Shravan who had previously helped another accident victim and had gotten famous for doing so.

"I spoke to a male nurse, Mr Hakim K, who was with him and understood that Dr Shravan was checking the patient's vitals and determining if he was in any life-threatening danger.

"Mr Hakim told me that they were on their way to a patient at River Valley and had stopped to help when they saw the victim lying on the road.

"I would like to commend both Dr Shravan and Mr Hakim on their good hearts and a job well done!"

In response to a Stomp query, the police said they were alerted to the accident at about 8.15pm.

"The motorcyclist, a 67-year-old male, was conscious when conveyed to Singapore General Hospital," a police spokesman said.

In October last year, Dr Shravan Verma, founder and chief executive officer of 24-hour medical service Speedoc had stopped to help a motorcyclist who had been involved in an accident with a taxi near Lau Pa Sat.

Speedoc is a Singapore-based house-call service.