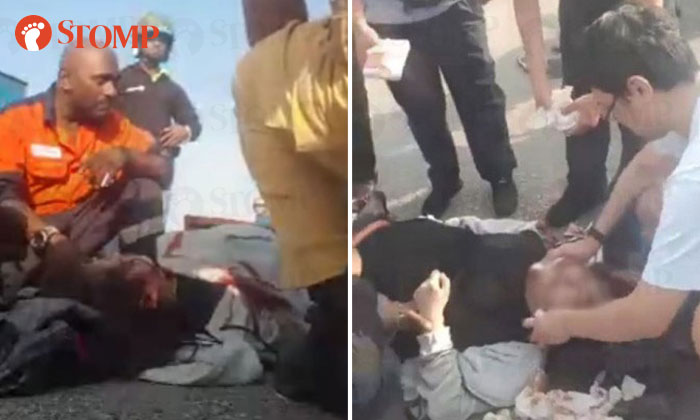 Stomper Stone came to the aid of a female rider who was involved in a three-bike accident along the Second Link Expressway in Johor on Thursday morning (Aug 1).

He was riding home from Singapore after completing his night shift when he came upon the accident scene near the Malaysia-Singapore border.

In photos and videos he shared with Stomp, a woman is seen lying on the road with blood on her face and clothes.

"She had a bad head injury," said the Stomper.

"I helped to recover her breathing and cover her head until the Malaysian ambulance arrived about one hour and 20 minutes later.

"Three bikers were involved in the accident.

This is not the first time Stone has helped accident victims on the road.

From pulling a trapped driver from a car to rendering assistance to fallen riders, the Malaysian said he has a passion for first aid.

Previously, Stomp presented Stone with a Stomp Goody Bag to recognise his kindness and helpfulness to others.

By sharing his experiences on video, he believes that they serve as important evidence to those involved and helps to promote the act of helping others.