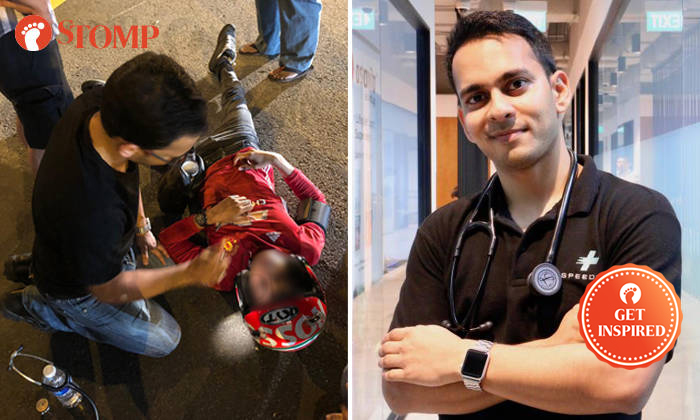 A motorcyclist was lying injured on the road after an accident near Lau Pa Sat on Sunday night (Oct 7) when a man and a woman who were passing by came to his aid.

The man turned out to be Dr Shravan Verma, founder and chief executive officer of 24-hour medical service Speedoc.

Established in November last year, Speedoc is a Singapore-based house-call service that brings medical professionals right to your home.

In response to a Stomp query, the police said they were alerted to an accident involving a motorcycle and a taxi at the junction of Cross Street and Raffles Quay at 9.55pm.

"The motorcyclist, a 32-year-old man, was conscious when conveyed to Singapore General Hospital," added a police spokesman.

Stomp understands that the victim suffered multiple abrasions and pain on his left leg.

Stomper AThankfulBystander was at the scene at around 10pm when she heard a bang.

She told Stomp: "I turned to see this a man on the ground, with his fallen motorcycle some distance away. He was groaning in pain.

"Not long after, many people ran to the scene to help, including a doctor who identified himself as a medical personnel."

Dr Shravan, 30, had been on his way to visit a patient in Jurong with a nurse when they came across the crash victim.

Stomper AThankfulBystander said: "The doctor had medical equipment in his car nearby and used those to help check the vital signs on the victim, while the rest of the people helped to direct traffic around the accident site.

"He also checked for broken bones, gave instructions on how to immobilise the victim's neck, and kept the victim calm until the ambulance arrived.

"I spoke to the female nurse who was helping the doctor, and I believe that they are from a company called Speedoc."

The Stomper, who asked to remain anonymous, said she simply wanted to recognise the good deeds of these Good Samaritans.

"I would like to thank this doctor and all the rest for stepping up. I’m just glad they happened to be there to help," she added.

"This is what Singapore should be like: A nation of people helping one another.

"Good job and thank you for helping!"

Responding to queries by Stomp, a Speedoc spokesman said: "Speedoc is proud of the help rendered by its CEO, Dr Shravan Verma, to a road traffic accident victim.

"We stand by his actions as one that inspires us every day in our mission to help the people around us."