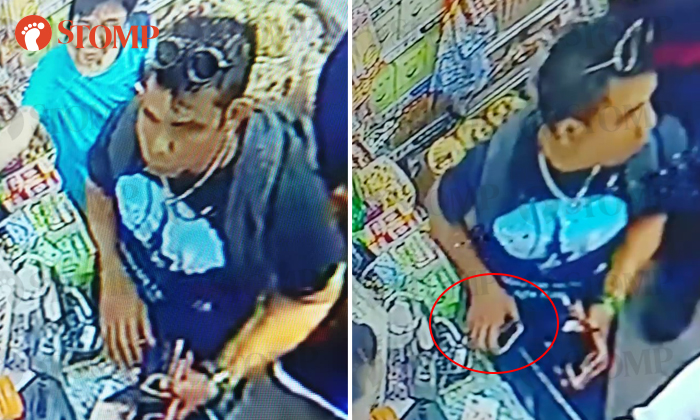 Anything can happen in seconds when your back is turned.

Stomper Liang shared how his friend, Stomper Chou, left his iPhone 6 and wallet at a Buzz convenience store in Woodlands Regional Bus Interchange on July 4.

However, they returned less than a minute later to find Chou's valuables gone.

Chou told Stomp: "I forgot about my things and left them there. I only took a few steps out of the shop when I remembered and went back.

"However, someone had already taken the items.

"I think I'm quite unlucky as it was really just a few seconds."

CCTV footage of the incident, which occurred at around 9.55pm, shows how another male customer had taken the items from the shop counter.

In the video, the man can be seen making payment at the cashier when he took the wallet and phone from the counter.

He then lumped both items together with his wallet, which he was holding in his left hand, while appearing to look around the shop.

Liang, who also posted the video footage on Facebook, added: "My friend forgot about his items, went off for less than a minute, and returned to find them missing."

According to Liang, the police arrived at the scene after a call was made.