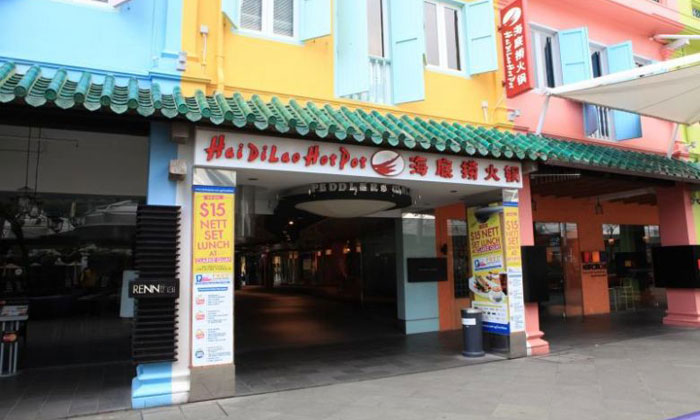 Infuriated by a fellow customer who had put his food bowl on a condiment counter in steamboat restaurant Haidilao, a man smashed a sauce bowl into the other man's face after arguing with him.

The victim was cut in his face, and incurred more than $2,000 in medical and other related expenses.

On Thursday (Nov 14), Jason Esaias Gao Weijie, 34, was fined $4,000, after he pleaded guilty to one charge of voluntarily causing hurt. He had also compensated the man $8,000 previously.

The court heard that Gao and the other customer, Mr Eugene Lee Wei Liang, 33, were in the steamboat chain's Clarke Quay restaurant at about 3.30 am on Jan 12 this year when they got into an altercation.

Deputy Public Prosecutor (DPP) Shana Poon told the court that Gao was queuing behind Mr Lee at the restaurant's condiment counter, and Mr Lee was eating from a bowl while waiting in line.

When Mr Lee reached the front of the queue, he placed the bowl he had been eating from on the counter.

"(Gao) got angry at the victim as he felt that the victim's act of leaving the bowl on the counter was unhygienic," said DPP Poon.

Gao asked Mr Lee to remove the bowl, but Mr Lee said he would do so after filling his sauce bowl, she added.

Gao got agitated and the two quarrelled.

As Mr Lee was leaving the queue with his bowl of sauce and the food bowl, Gao "used his left hand to grab at the victim's neck from behind, then smashed his own sauce bowl into the victim's face", said DPP Poon.

Gao then pushed the victim, and had to be pulled away by onlookers. Mr Lee's friend called the police.

Mr Lee was given six days' medical leave for a 1.5cm cut on his nose. He spent more than $2,400 on medical and other related expenses like an optical lens and scar cream.

For his offence, Gao could have been jailed for up to two years and fined a maximum of $5,000.