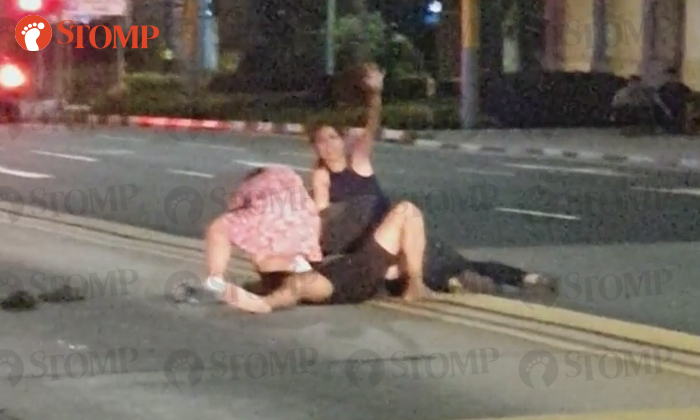 Two men were caught on camera having a tussle in the middle of the road during the wee hours of Friday (Nov 8) as their companions tried to separate them.

Stomper Marcus, who was passing by, submitted a video of the incident that occurred outside Bugis Cube shopping mall at around 1.30am.

In the video, two women appear to be trying to stop the altercation.

Marcus told Stomp: "Two drunk men were seen shoving each other and they ended up wrestling and falling onto the road. One of them was spouting vulgar words loudly in Hokkien.

"Both the police and the ambulance were called.

"Paramedics attended to one man and his girlfriend after the police were done with their job."

In response to a Stomp query, the police said they were alerted to a case of voluntarily causing hurt at 470 North Bridge Road at 1.20am.

"The parties involved were advised on their legal recourse," a police spokesman added.

The Singapore Civil Defence Force (SCDF) said it responded to a call for assistance at about 2am and one person was assessed by paramedics.