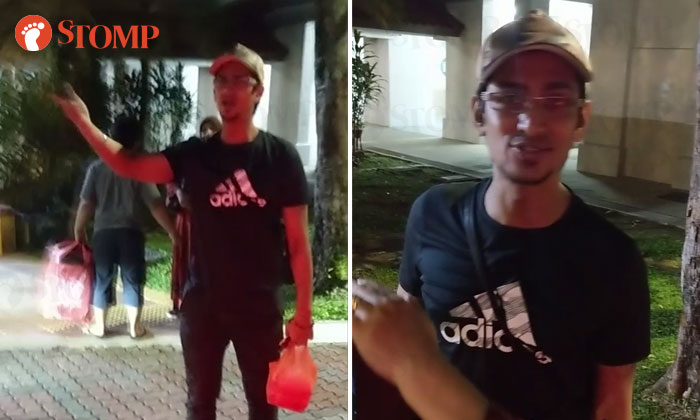 Stomper Shivering Dog was driving home with his mother and brother when he sounded his horn at a car in Yew Tee on Dec 5 at about 9.15pm.

His action spurred a pedestrian to approach his car and start shouting at him.

"As we entered the estate, there was a white Honda Vezel SLW3501M, supposedly driven by the man's aunt, illegally parked on the side of the entrance of the estate whereby a solid white line was clearly marked," the Stomper said.

"As SLW3501M was moving off, it cut into the opposite lane and nearly caused a head-on collision with my vehicle.

"I sounded my horn and the rest is history."

In a video the Stomper shared with Stomp, the man wearing black is seen coming towards his car and asking, "You blind, is it?"

"The video may not have caught it clearly but he flashed a middle finger and that's why I stopped my car to ask him what the issue was and to offer to show him my cam video," said the Stomper.

"He rejected and told me to 'f**k off' for no good reason and that got me triggered."

The man continues to taunt the Stomp and says, "you shivering ah?"

He gets a member of his party to record the Stomper whose brother is doing the same.

The man says: "My face so handsome, right? I know."

He also shouts at his mother not to interfere as she tries to de-escalate the situation.

Eventually, the Stomper and his family get back into their car and drive to the carpark as the man calls him a "dog".

"I just felt it was unnecessary especially after all the rude gestures and insults thrown at us and calling me blind and all," said the Stomper.

"Perhaps he would like to get his eyesight checked.

"People are saying swearing and pointing middle fingers are not chargeable offences under the law and that the Vezel did not swerve into the opposite lane.

"I checked with my lawyer and this guy can easily be charged with harassment and criminal intimidation."