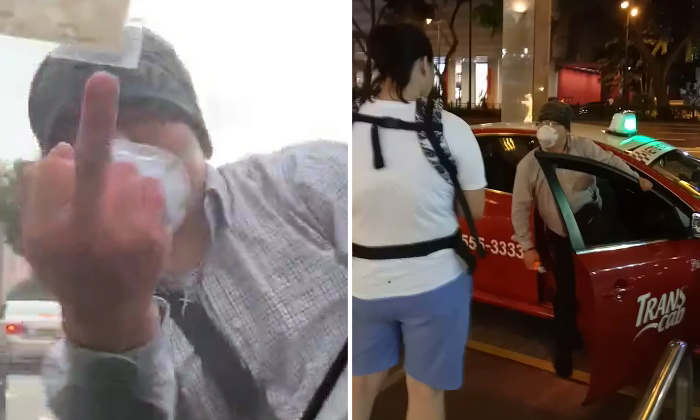 A taxi driver who was caught on camera behaving aggressively towards a motorist and a couple in two separate incidents has been arrested and will be charged in court on Thursday (Dec 5).

In the first incident, the police said they were alerted to a case of road rage involving the cabby and a car driver along Paterson Hill on Nov 22, at around 3.20pm.

"Preliminary investigations revealed that the taxi driver had confronted the car driver after being honked at by the car driver," said the police in a statement.

"During the confrontation, the taxi driver kicked, and used his fist and elbow to hit the victim’s car, causing damages to the car."

The car driver was not injured.

In a separate incident that occurred on Nov 24 at around 11.30pm, the same taxi driver was involved in a dispute with his passengers at the taxi stand of Far East Plaza.

"During the dispute, the taxi driver is believed to have swung a pair of pliers at both passengers and pushed one of the passengers who was carrying a 5-month-old baby, causing her to fall and injure her hand," the police added.

The baby was unhurt.

He will be charged in court on Dec 5 with criminal intimidation and voluntarily causing hurt.

Feng, who was fired by Trans-Cab, had earlier told Lianhe Wanbao that he planned to return to China and live in seclusion as part of a spiritual retreat.