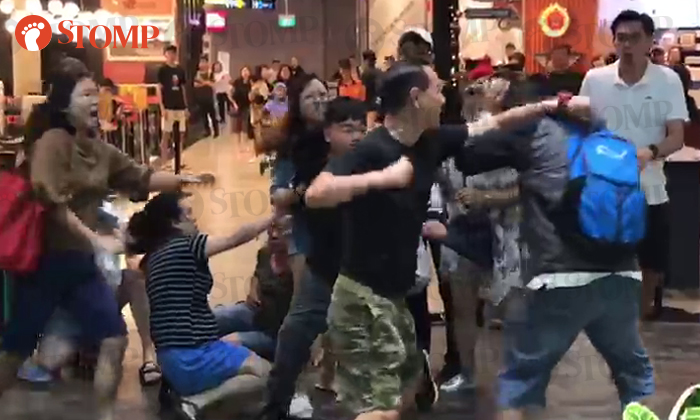 Two men, aged 43 and 55, were arrested after a fight broke out at Jewel Changi Airport on Sunday morning (Dec 8).

In the video, a large group consisting of both men and women can be seen involved in the altercation outside fast food restaurant A&W.

There appears to be hair-pulling, the tugging of clothes and punches exchanged in the violent dispute, while others can be seen trying to break things up and shouting, "Stop!"

In response to a Stomp query, the police said they were alerted to a call for assistance at 78 Airport Boulevard at around 11am and arrested two men for affray.

A spokesman for Jewel Changi Airport directed Stomp to the police when contacted.

Related Stories
5 arrested after men use chairs to hit one another in Geylang brawl
Fight between 2 men at Canberra coffee shop ends in them removing shirts and getting arrested
23-year-old man involved in Tanjong Pagar brawl arrested for causing grievous hurt with dangerous weapon
More About:
fight
Changi airport
arrest
dispute