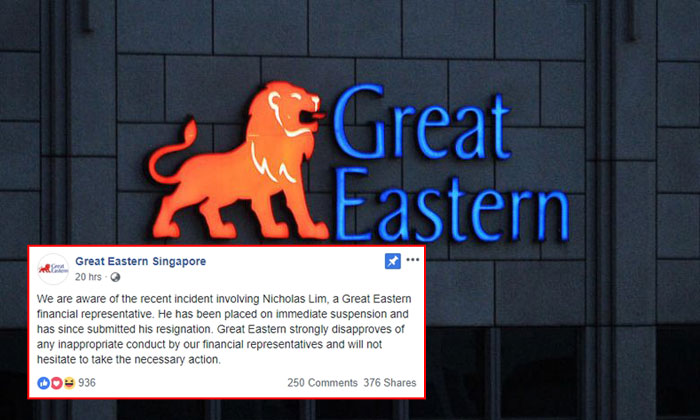 Insurer Great Eastern Singapore has suspended a financial advisor who is allegedly the National University of Singapore (NUS) student who took a video of a female undergraduate in her hostel shower on campus.

The company identified him as the financial representative as Mr Nicholas Lim in a statement on Facebook on Monday night (Apr 22) and said that he has since submitted his resignation.

The statement said: "Great Eastern strongly disapproves of any inappropriate conduct by our financial representatives and will not hesitate to take the necessary action."

The post was met with approval by netizens after members of the public and undergraduates have been calling for harsher punishment against Mr Lim.

The came after the victim, Monica Baey, 23, took to Instagram to publicise the incident and demand firm action to be taken against Mr Lim who was slapped with a 12-month conditional warning.

This means that if he commits another crime, he will be charged for that and the earlier offence.

The police responded to the case in a statement explaining why he was given a conditional warning, stating that he showed a "high likelihood of rehabilitation" and that a criminal record could "ruin his future".

NUS will set up a committee to review its discipline and sentencing framework and the 'second strike and you are out' policy for sexual misconduct offences will be part of this review.