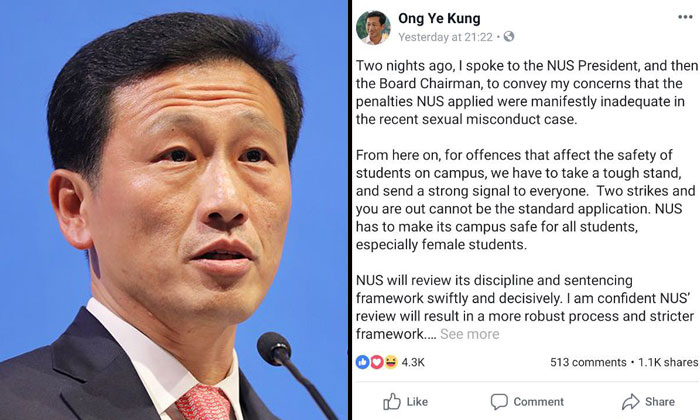 Education Minister Ong Ye Kung has commented publicly on the recent scandal involving a male student who was caught taking a video of a female undergraduate while she was showering in her hostel bathroom at the National University of Singapore (NUS).

Mr Ong said in a Facebook post on Monday night (Apr 22) that the penalties meted out by NUS were "manifestly inadequate in the recent sexual misconduct case".

He wrote that he spoke to the NUS President and Board Chairman on Saturday (Apr 19) to convey his concerns.

"From here on, for offences that affect the safety of students on campus, we have to take a tough stand, and send a strong signal to everyone," he added.

"Two strikes and you are out cannot be the standard application.

"NUS has to make its campus safe for all students, especially female students."

He said NUS will review its discipline and sentencing framework "swiftly and decisively".

"I am confident NUS' review will result in a more robust process and stricter framework," he said.

"The NUS Board and President are seized with this matter, and are determined to put a stop to such unacceptable behaviour on campus."

Mr Ong's comments come after 23-year-old NUS undergraduate Monica Baey took to Instagram to share how she was recorded by a fellow student while she was showering in her hostel bathroom at Eusoff Hall last November.

After NUS released a statement that the university will set up a committee to review its current disciplinary and support frameworks, Ms Baey and close to 500 other students also signed another petition addressed to several heads of the university, calling for more clarity on the members of the committee.

Following Mr Ong's comments on Monday night, NUS president Tan Eng Chye said in a statement: "I welcome the Board’s announcement of the formation of the review committee on sexual misconduct.

"The 'second strike and you are out' policy for sexual misconduct offences will be part of this review.

"NUS will take a hard stand on offences that impact the safety of our students.

"We must make our campus safe and supportive for all members of our community.

"I look forward to working closely with the review committee members to strengthen the disciplinary process and support network for our students."

NUS announced on Saturday that the review committee will be chaired by Madam Kay Kuok, a member of the NUS Board of Trustees and chairman of its nominating committee.